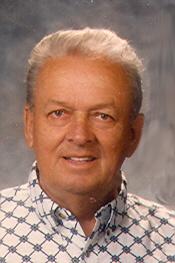 Claire Gordon Anker, 83, of Appleton, formerly of Clintonville, passed away on July 5, 2010 surrounded by his loving family. He was born June 19, 1927 in Platteville, WI.

At Age 17 Claire enlisted in the Wartime Merchant Marines, attended training with the Coast Guard and received his Able Body Seaman's Certificate. He was assigned to a new tanker named SS Chemawa and was in Okinawa, Japan on D-Day. They were the first merchant ship to enter Tokyo Bay and were anchored 200 yards from the USS Missouri when the Peace Treaty was signed on September 4, 1945. He then spent 18 months as a helmsman on the largest troop ship, the George Washington.

He returned home and worked as a livestock veterinarian's assistant. On September 30, 1950, at the age of 22, he married Charlotte Elaine Scott. Claire then served 2 years in the Korean War with Company M of the 279th Regiment of the 45th infantry. He proudly served with the Wartime Merchant Marines, the U.S. Coast Guard and the U.S. Army.

Claire worked for 21st Genetics for 15 years, and in 1964 he went to work for Aid Association for Lutherans (Thrivent) as a District Representative. Claire received the Fire Chief Award for selling the most insurance as a first year representative. In 1990, at age 63, he retired from AAL after 26 years. Claire had the distinguished honor of being inducted into the AAL Hall of Fame.

Claire was a faithful member of Faith Lutheran Church and was active in the VFW in Freedom, WI. In April, he was thrilled to have the opportunity to fly to Washington D.C. on the “Old Glory Honor Flight” with fellow WWII veterans. He loved entertaining his family and friends at his home on Pine Lake, and his greatest joy was spending time with his eight beautiful grandchildren.

He is survived by his loving wife of nearly SIXTY years, Charlotte “Scottie” Anker; his three daughters , Pamela (Peter) Zingler of Wausau, WI, Debra (Eric) Burnett of Corpus Christi, TX, and Sandra (Dennis) Lange of Appleton, WI; his eight Grandchildren, Jacob Sabrina, and Shelia Zingler, Benjamin (Fiance Heather), Brianna and Bethany Burnett and Jared and Brandon Lange; his brother Alan (Lois) Anker of Wausau, WI and his sister Betty (Edward) Heideman of Clintonville, WI and many nieces and nephews. He was preceded in death by his parents, Lloyd Edwin Anker and Marjorie Belle Allen.

A Memorial service will be held on Thursday, July 8, 2010 at 11:00 AM at FAITH LUTHERAN CHURCH (601 E. Glendale Ave, Appleton) with Rev. Rudy Herbrich officiating. Friends may call on Thursday, July 8, 2010 from 9:30 AM until the time of services at the Church. In Lieu of flowers memorials may be made to Celebration Lutheran School.
Wichmann Funeral Home
537 N. Superior St.
Appleton, WI
920-739-1231