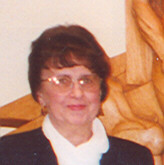 Charlotte Ann Handschke, age 67, of Appleton, was called to her eternal home unexpectedly on Tuesday afternoon, February 10, 2009.
Charlotte was born April 26, 1941 in the town of Greenville to the late Alfred and Margaret (Hoewisch) Handschke. She was a graduate of Fox Valley Lutheran, Class of 1959.
She was formerly married to Ralph E. Fenske.
For twelve years Charlotte worked at Appleton Awning as a seamstress. She took great pride in her work, and could sew almost anything. Every stitch she made was made with love and care.
Charlotte enjoyed reading, fishing with her boys, but most of all spending time with her family and beloved grandchildren. Family came first and she touched everyone's life in her own special way.
She was brought into faith first through baptism and later confirmed at Bethlehem Lutheran Church, Hortonville. She was a faithful and dedicated member of Faith Lutheran Church, Appleton.
Charlotte is survived by her five sons: Brian (special friend Ammi Peters) Fenske, Kevin (Shelly) Fenske, Tim (Trudy) Fenske, David (fiancé Courtney) Fenske, and Jeff Fenske; nine grandchildren: Chris, Nick, Alex, Blaize, Sadie, Portia, Travis, Tatum, and Teaghan; three sisters: Regina (Lindell) Hindersman, Gloria (Wayne) Swanson, Cordella (William) Henderson; her brother: Carlton (Ellen) Handschke; sister-in-law: Glenna Handschke; and many other friends and family including her special friend Gary Emmel, Kim Fenske, and her wonderful co-workers at Appleton Awning.
In addition to her parents, Charlotte was preceded in death by her two brothers: Erwin and Werner Handschke.

Funeral Services for Charlotte will be held 10:30 a.m. Monday, February 16, 2009 at FAITH LUTHERAN CHURCH, 601 East Glendale Ave., Appleton. Rev. Daniel Thews will be the officiant. A time of visitation and support will be held at the church on Monday from 9:00 a.m. until the time of service. Burial will take place at Appleton Highland Memorial Park Cemetery.
In lieu of flowers, a memorial fund will be established in Charlotte's name.
Charlotte's family would like to extend a heartfelt thank you to the paramedic's and the staff at Appleton Medical Care Center.

Thus, being justified by faith, we have peace with God through Jesus Christ our Lord and Savior. You were a wonderful mom and grandmother, you will always be in our hearts, and your entire family will truly miss you.