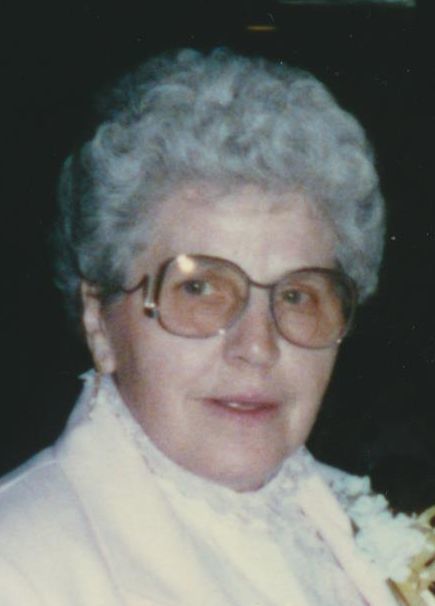 Charlotte was born in Antigo, WI to the late Leonard and Verna (Pautz) Parsons on September 27, 1923, Charlotte married Sylvester Holub at St Peter Evangelical Lutheran Church in Polar, WI on December 15, 1945. They resided in Antigo, WI until 1962 when they moved to Fond du Lac, WI Charlotte worked in the Fond du Lac School System as a cook at the High School. She also worked at Wells Mfg in Fond du Lac and Green Giant Canning Company in Rosendale. In 1969 Charlotte and Sylvester moved to Appleton, WI. Charlotte loved to cook, have picnics in the park, Friday Night Fish Fries, and gardening. She worked with the caretakers at Riverside Cemetery for several years. Charlotte loved spending time with her family and friends. When Charlotte retired she became the cook at Mount Olive Evangelical Lutheran School. Charlotte cooked daily lunches for approximately 125 children daily and she helped canned and freeze fruit and vegetables that were donated to the lunch program by parishioners. She baked and cooked for the children, many times from scratch by just increasing the ingredients of her own home recipes. In 1996 Charlotte and Sylvester moved to Greenfield Manor in Little Chute, WI. Charlotte enjoyed the company of all of her neighbors while living there. She would help out the neighbors that were ill or not able to take care of themselves by cooking meals and delivering them to their apartments. She enjoyed the Pot Luck Suppers that they had at Greenfield Manor every Thursday night. It was not an unusual sight to see several of her neighbors gathering to get into her van and she would drive them to summer concerts in the park or to various events. She also would take them to appointments when they needed a ride. Charlotte loved to help other people however she could. In 2010 Charlotte moved to Fox River Assisted Living in Appleton. She resided there until 2015 at which time she moved to Atrium Post Acute Care in Little Chute.

Charlotte loved her Lord and was always ready to serve Him however she could. She was a member of Mt Olive Evangelical Lutheran Church (WELS). She served on the Altar Guild & was a member of their Ladies Aide for many years.

Charlotte was preceded in death by her husband Sylvester; her son, Joseph; her parents; two sisters Elva Brandt & Thelma Goese; her brothers-in-law Herbert Brandt and Wilburn Wendt; a sister-in-law and brother-in law, Ruth and Emmanuel Holub; and her nephew, Edward Brandt.

A Christian Funeral for Charlotte will be at 1:00 p.m. on Monday, October 31, 2016, at MOUNT OLIVE EV. LUTHERAN CHURCH, 930 E. Florida Avenue, Appleton, with Rev. Robert Raasch officiating. Friends may call at the Wichmann Funeral Home, 537 N. Superior Street, Appleton, on Sunday from 4:00 p.m. to 8:00 p.m. and again directly at the church on Monday from 11:00 a.m. until the time of services. Interment will be in Riverside Cemetery, Appleton. The family would like to extend a sincere thank you to the staff at Atrium Post Acute Care in Little Chute for their loving care. Online condolences may be offered at www.wichmannfargo.com A memorial has been established in Charlotte's name to benefit Mount Olive Ev. Lutheran Church.