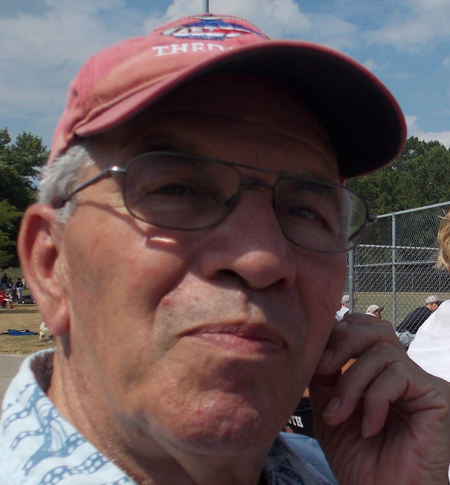 He was unassuming, a touch shy, and extremely fond of a good obituary. Hopefully this one would do him proud. Chuck also loved old time radio, new gadgetry and all manner of technological innovation. He had a soft spot for our stray cat Bunky, all four seasons, the Fox River, the Memorial Day and Santa Claus parades, old Goodland Field and the Foxes. Chuck was a lifelong Appleton Public Library devotee who occasionally strayed over to the Menasha Public Library, probably to spice things up a bit (but it was nothing serious, APL). He loved teaching himself new tricks and the thrill of the genealogical chase.

Chuck would have hated to brag but we think you should know that he was related to Jimmy Carter (fifth cousin, once removed), Mary Queen of Scots (illegitimately, let's just leave it at that), and his mother's uncle, Clarence Currie (MLB pitcher). He could also boast being a direct descendant of B.L. Scherck, whose claim to fame was being the first person in recorded history to lose a limb to an electric streetcar—one hand and the toes on one foot, to be precise. Chuck's thorough research also proved he came from hearty peasant stock. His were stern and stoic people who, at least according to the photos, had nothing to smile about. Ever.

He was inordinately proud (or insufferably smug, if you were unlucky enough to come from somewhere else) of his hometown, as if Appleton had been his idea in the first place. If we had a nickel for every time he pointed out Appleton was the home of the first hydro-electric station, or the first house in the world powered with hydro-electricity was right here too, or we had one of the first streetcars in the country…well, we could all retire early and in high style.

He had no respect for shoddy workmanship, or all things jerry-rigged, ostentation, confrontation, nosiness. He was punctual, tidy, responsible; and sorely wished the world would do the same. He was deeply suspect of anyone who slept in when they weren't sick, whose eyes were bigger than their stomachs, or who claimed to fight a long and courageous battle against any illness. Chuck, of course, went kicking and screaming. For our part, his battle wasn't nearly long enough and we will miss him very much.

He and his wife, Sandra Ann Douglas Hill (deceased), created a home together which was simple but warm, with a 24/7 welcome mat set out for family. We could count on fresh sheets, a pot of chili, and pancakes in the morning. When times were tight–and they often were early on–his was a no-nonsense approach to getting by. If we complained about how nippy he kept the house we were told a thousand times if we were told once, “Quit your bellyaching and put on another sweater, for crying out loud.” Solid advice from a practical man.

Chuck never passed up a chance to stop at a historical marker with something akin to reverence, no matter how far off of the interstate it was situated or how small the history. The perfect lack of enthusiasm coming from the backseat left him stubbornly undeterred. He always knew that he was a small part of something big.

He was both brave and naive when he decided to set off for California with his wife and three adolescent monsters in nothing more than a mid-sized sedan. Not everyone is so brave. Chuck doggedly drove through the blizzard of '82 to deliver his unimpressed brood of ingrates directly onto the front porch of Old Abe's neighbor's (suspiciously dilapidated) house. No matter he was actually aiming to visit Lincoln's house. Few can say they had a dad who went out of his way to visit presidential neighbors.

Boppa perfected the art of making malts, sundaes, and fluffy pancakes with brown and crispy edges. He ground his own telescope lenses and taught himself to play both harmonica and guitar. He appreciated squareness, plumbness and levelness in all things.
Chuck was a consummate professional and a firm believer if you were going to do something, you ought to do it right. He made a living finishing cement, and finishing it right. He poured and smoothed miles of it over the years for Appleton. Many of you have unknowingly travelled along city sidewalks which Chuck, master of the triple trowel, expertly coaxed into the prettiest pavement anywhere around and which will continue to thumb their noses at the inexorable march of time, long after he's gone. He never tired of revisiting his work, or of dragging us all along with him on these regular inspections, both pre- and post-retirement.

Years ago, sometime in the 70s back on Kernan Street, he took some leftover cement and fashioned a crude tombstone which read “Here lies Chuck…he forgot to duck.” Foolishly, we abandoned that tombstone (it was more awkward than heavy) when we moved closer to City Park in the early 1980s. For obvious reasons, we'd like the tombstone back. Thanks in advance if you know where it is and can help us out.

Hats off to the squirrel who lived in Boppa's garage and managed to outsmart him over and over again by finding the birdseed regardless of the elaborate obstacles placed in your path. You win both the battle and the war. His admiration for your genius and perseverance is eternal. He really got a kick out of you, we think you should know.

Last but not least, Chuck's big sister Pat wants to make sure we point out the fact Chuck wasn't just a nice man, he was also a good man. We couldn't agree more.

“…by the way, this was the first electric street car that ever run in the USA and I was the first person hurt by a street car. This accident cost me my right hand below the elbow and 4 smaller toes off my left foot, 7 ribs broken, collar bone broken, other than that I was OK.” B. L. Scherk, Autobiography of B.L. Scherck, (1958), p. 1.