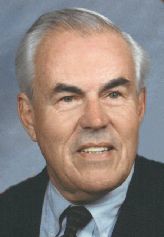 Charles “Chuck” Lewis was born in Elmira, New York and met the love of his life, Janice “Jan” Ewing, in elementary school. He was smitten early, but it was an unrequited crush. In middle school, a teacher recognized Chuck's potential and recommended that he attend a special science and math program at another school, and put the idea of college in his head for the first time. After a year at that school, Chuck decided to return to his neighborhood high school. To his utter shock and delight, Janice asked him to the school dance and the foundation of the rest of his life was set.
At that time, the GI Bill was in place to provide a free college education to veterans, and Chuck grabbed onto that as the ticket to his future. He enlisted and served his tour in the Army band. Chuck had been a musician in school and played clarinet in a dance band that worked the local school dance circuit.
Before entering the Army, Chuck and Janice were married and honeymooned in Niagara Falls. After serving his tour, Chuck returned to Jan and applied to Rensselaer Polytechnic Institute (RPI), a prestigious engineering program. He was accepted and subsequently became the very first college graduate in his family (Jan was only the second in her family). During this time, they lived in various locations in the northeastern US.
Their sons, Mark and Paul, were born in Rochester, New York and the family subsequently lived in Cincinnati and Dayton, Ohio and, finally, Appleton Wisconsin. Family was always the most important thing in their lives and they were delighted that their sons married two wonderful life partners of their own, Gwenn and Rosario. Most important were their four grandsons (Benjamin, Matthew, Christopher and Anthony), of whom they were immensely proud.
Aside from the family, Chuck and Jan devoted their lives to helping others. Jan went back to school and became an elementary teacher. Chuck served as a volunteer and on the boards of directors of a long list of charitable organizations, and he had a soft spot for those that helped children. He was a passionate believer in the power of mentoring and personally helped a number of people. One of his fondest accomplishments was seeing a young man whom he recently mentored finding success in his own life.
For those of us who knew Chuck, there were three things that stood out – his unflagging positive attitude, his compassion for others, and his sense of humor. These, and the family that he was so proud of, made for a very full life.
A Memorial Service will be held on Saturday, April 22, 2017 at 6:00 p.m. at WICHMANN FUNERAL HOME, 537 N. Superior Street in Appleton. Visitation will be held on Saturday beginning at 5:00 p.m. until the time of the service. In lieu of flowers, memorial contributions may be made to the Charles and Janice Lewis Fund for Youth Mentoring (Community Foundation) – dedicated to connecting at-risk children with caring adult mentors, or memorials may be made to Big Brothers Big Sisters of the Fox Valley.
Chuck's family would like to thank the staff at The Heritage and Peabody Manor in Appleton for your excellent care and compassion that made Chuck's last month's enjoyable.