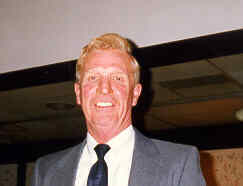 Age 63, entered Eternal Life unexpectedly on August 26, 2001, at Appleton Medical Center. Chuck was born on July 19, 1938, in Appleton to Lucille (Barrett) Mader and the late Charles C. Mader, Sr. He served his country in the United States Navy. Chuck married Leann Kohl in 1988. He was a salesman for Factory Motor Parts, Appleton, and spent his entire career in the automotive industry. Chuck began at Mader‚Äôs Service Station and was later employed at Automotive Supply. He loved the outdoors and was an avid golfer, hunter, fisherman and camper. Chuck spent many weeks and weekends traveling and camping in his motorhome, with a particular fondness for Colorado and Montana. Survivors include his wife, Leann; his mother; his daughters, Susan (Michael) Nugent, Appleton, and Jennifer, at home; his sons Dennis (Diana), Waukesha, and Michael, Chilton; his grandchildren, Joanna, Marissa, Andrea, Peter and Ryan; his sisters, Judy (Jim) Ebben, Appleton, and Georgianna (Jim) Pankratz, Appleton; and his brother Louis (Deb), Shawnee, Kansas; numerous nieces and nephews; and his former wife Janice, mother of three of his children. The Funeral Liturgy will be held at 11:00 a.m. on Thursday, August 30, 2001, at ST. BERNARD CATHOLIC CHURCH, 1617 West Pine Street, Appleton, with Rev. John P. Bergstadt officiating. Interment will be in St. Joseph Cemetery, Appleton. Friends may call at the Wichmann Funeral Home, Appleton, on Wednesday from 4 to 8 p.m. and again directly at the church on Thursday from 10 a.m. until the time of services.

You guided us lovingly as a husband, father, grandfather, son and friend personally on a daily basis. Know that we appreciate your love, will miss you deeply, but are comforted by knowing you are now our guiding angel.