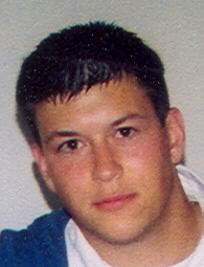 Chad M. Williams, of Greenville, age 25, died unexpectedly, Sunday, October 31, 2004. He was born October 5, 1979, in Greenville, the son of Don and Suzanne M. (Guetschow) Williams and had been a Greenville resident most of his life. Chad had been employed by Associated Bank of Stevens Point and most recently by School Specialties, of Greenville. Chad had a love of all sports, especially baseball and football. He was especially proud of playing baseball and football for Hortonville High School. While playing baseball for Hortonville High School, the team took the State Championship in 1996 and 1997 and Chad was All State in 1997. While playing football for Hortonville High School Chad was All Conference. He was a member of the National Honor Society and was a avid Cubs Fan.

The funeral liturgy for Chad will be held at 11:00 am, Thursday, November 4, 2004, at ST. BERNARD CATHOLIC CHURCH, 1617 South Pine Street, with Father John Bergstadt officiating. Burial will be in St. Mary Cemetery. Friends may call at the funeral home from 4 ‚Äì 7 pm, Wednesday and on Thursday, at the church, from 10:00 am, until the time of the mass. A memorial fund is being established.