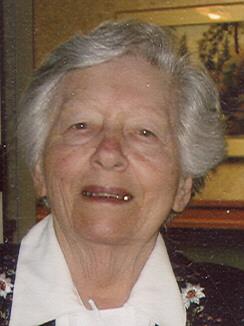 Age 88, passed away peacefully with family present at her Angelus home on Sunday, June 25, 2006.

She was born March 30, 1918, in Sherwood, Wisconsin, the daughter of the late John J. and Agnes (Janty) Scherer. She was united in marriage to Roger G. Gregorius on October 28, 1947, at Sacred Heart Catholic Church in Sherwood.

Sally was very active at St. Joseph Parish in Appleton. She was the cafeteria cook for the grade school for many years, was an arts and crafts volunteer, helped with the preparation of funeral meals, and cooked for the church events. She was an avid card player, especially sheepshead, which she played regularly on Mondays and Thursdays with her friends at Angelus, and with her cousins and her sister, Bernie. She enjoyed embroidery and quilting. Her greatest joy was spending time with her children, grandchildren, and great grandchildren.

The funeral mass for Sally will be celebrated at 10:30 a.m. Wednesday, June 28, 2006, at ST. JOSEPH CATHOLIC CHURCH, 410 West Lawrence Street, Appleton, with Rev. Larry Abler, OFM Cap. as celebrant. Interment will be in St. Joseph Cemetery. Friends may call directly at the church from 9:00 a.m. Wednesday until the time of the liturgy.
A memorial fund in Sally‚Äôs name is being established.

Sally‚Äôs family would like to extend a special thanks to her caregivers at Angelus Retirement Community and Heartland Hospice, especially her nurse, Lisa.