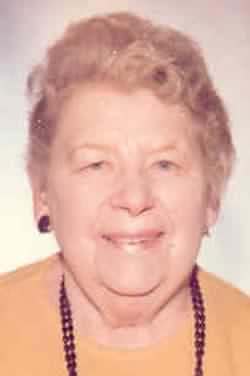 Age 81, passed away on Sunday, July 13, 2003 at Franciscan Care Center. She was born on January 9, 1922 in the Netherlands the daughter of the late Wilhelm and Geertruida (Janssen) Van Hulst. On May 10, 1946 she married Frank Loeffen in Nijmegen, The Netherlands. They came to America and Appleton in 1955, and had lived here since. Catharina was employed by Zwicker Knitting Mills for almost 30 years retiring 19 years ago. The greatest joy in her life was the flower garden she tended every year.
She is survived by her sisters Annie Van Hulst, and Miep Walden; her sisters-in-law Bertha Loeffen, and Cato Loeffen all of The Netherlands; nieces, nephews, family members, and friends. She was preceded in death by her parents, her husband in 1990 in Appleton, her sister Rita Coolen, and two brothers-in-law both in the Netherlands.
A funeral Mass will be celebrated on Saturday, July 19, 2003 at 11:00 AM at St. Joseph Catholic Church, 410 West Lawrence Street in Appleton with the Rev. Ken Reinhart officiating.
Entombment will take place at Highland Memorial Park. Friends may call at the church on Saturday July 19 from 10:00 AM until the time of the mass.
The family wishes to express their thanks to Dr. William Guenther and his staff, the Oncology Department of Appleton Medical Center, the staff of Franciscan Care Center, and her many friends who helped in countless ways.
WICHMANN FUNERAL HOME
537 North Superior Street
Appleton 739-1231