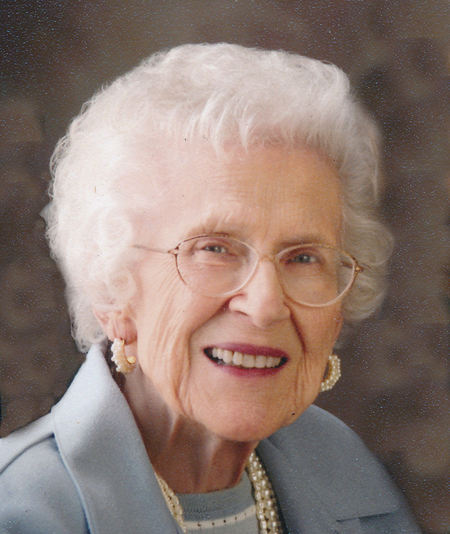 Caroline Mary Sullivan (Kalista), age 94, of Appleton, died peacefully on Saturday, June 30, 2012 at Brewster Village in Appleton. She was born on August 17, 1917 in Kaukauna, to Charles J. and Mary C. (Shuber) Kalista. Caroline graduated from Kaukauna High School, Oshkosh State Teachers College, and UW-Whitewater. On June 5, 1943 she married then First Lieutenant John A. Sullivan (Army Air Corps) at Holy Cross Catholic Church, Kaukauna. They spent almost one year together, before he was redeployed to the World War II European front. On December 5, 1944, Major Sullivan, a squadron commander and fighter pilot of the Eighth Air Force in England was forced down over the North Sea on a return trip from a mission to Berlin, Germany. His body was never recovered. They had one daughter, Carol A. Sullivan.
Caroline taught in Brussels, Wisconsin, Oshkosh, and then for many years at Appleton West and East High Schools while raising her daughter. At Appleton West, she was an advisor for the Clarion yearbook. Part way through her teaching career she earned her Master's degree at UW-Madison in business education. When Appleton East opened, she transferred there and established and managed a Cooperative Education program for business students until her retirement.
Caroline loved nature. Her favorite place was her cottage in the woods in northern Wisconsin. She bought the land and designed the cottage, which has been a gathering place for family and friends for many years. After her retirement, Caroline enjoyed travel with her sister Mary Ann, her daughter Carol, and friends. For a time, she spent winters in Florida with her sister. She was a volunteer at St. Elizabeth Hospital and St. Mary Catholic Church in Appleton and was a member of Catholic Daughters.
Among her many accomplishments, Caroline was a wonderful daughter, sister, wife, mother, aunt, godmother, teacher, Girl Scout leader, and neighbor. She was loved by all who knew her and will be greatly missed.
Caroline is survived by her daughter, Carol A. (Robert L. Smith) Sullivan; brother, Charles A. Kalista, Rolling Meadows, Illinois; brothers-in-law, Joseph L. (Edith) Sullivan, Cadott, Wisconsin and James (Judith) Sullivan, Madison; sisters-in-law, Betty Kalista, Fort Worth, Texas, Irene Sullivan, Cambridge, Wisconsin, and Ramona Sullivan, Waterloo, Wisconsin; many nephews, nieces, grand nephews and nieces and several great grand nephews and nieces and many dear friends.
She was preceded in death by her husband, her parents, her sister Mary Ann Kalista, her brother Clifford J. Kalista, her sister-in-law Joan Kalista and several beloved nieces and nephews.
The funeral liturgy for Caroline will be held on Friday, July 6, 2012 at 11:00 a.m. at ST MARY CATHOLIC CHURCH, 312 S. State Street, Appleton, with Fr. David Funk, OFM CAP officiating. Family and friends may visit Thursday, July 5 from 5:00 p.m. until 7:00 p.m. at Wichmann Funeral Home, 537 N. Superior Street and again on Friday at the church from 10 a.m. until the time of mass. A parish prayer service will be held at 6:30 p.m. on Thursday. Inurnment will take place in Holy Cross Catholic Cemetery, Kaukauna at a later date. Online condolences can be expressed at www.wichmannfargo.com.
The family extends a special thank you to all of Caroline's caregivers from Brewster Village, St. Paul Elder Services, and Home Helpers of the Fox Valley. Donations in her name may be made to 1000 Islands Environmental Center, Kaukauna, the Appleton School District or a charity of your choice.