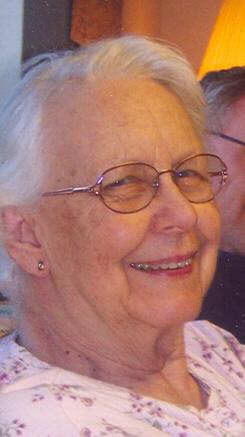 Age 87, passed away at Grand Horizons in Appleton on Sunday, September 4, 2011. Carol was born in St. Joseph, MO October 26, 1923, the daughter of the late William and Mary (Szopieray) Cowing. On May 18, 1946 she married her husband of 62 years, Roscoe Roberts, in Kansas City, MO. In 1969, she moved to Appleton from Kansas City with her husband. Carol volunteered her time with LEAVEN and was active with Roscoe in working with the Hmong community, assisting with language and relocation. She had a very strong faith in God and was very active in the church, including her involvement with the Ladies of St. Bernard. Carol will be remembered for being a dedicated, selfless and loving homemaker who cherished her family.

The funeral liturgy will be at 11:00 a.m. on Thursday, September 8, 2011 at ST. BERNARD CATHOLIC CHURCH, 117 W. Pine St., Appleton with Fr. Dennis Ryan officiating. Friends will be received at the church on Thursday from 9:00 a.m. until the time of the service. Burial will be in St. Mary Cemetery, Appleton.

The family extends a special thank you to the caring staff at Grand Horizons and to Southern Care Hospice for providing comfort and care.

In lieu of flowers, a memorial fund in Carol‚Äôs name is being established. Donations will be given to Carol‚Äôs favorite charities.

‚ÄúWe couldn‚Äôt have asked for a better Mom. You were the best. Your humor, laughter and tolerant nature will always be with us. You are our Sunshine.‚Äù