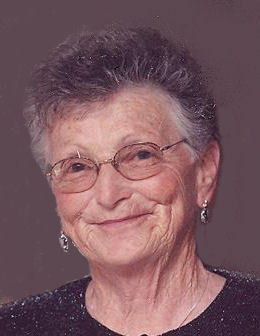 Carol Jean Van Asten, 78, Darboy, entered into eternal life on December 3, 2013. Carol
was born on December 29, 1934 to Peter and Anna (Bergman) Evers in Little Chute. On September 21, 1953 she married Jerome “Whitey” Van Asten at St. John Catholic Church. Carol and Whitey lived in Darboy most of their lives and were longtime members of Holy Spirit Parish, Holy Angels Church in Darboy.

Carol, “Mrs. Clean”, loved being with her family and friends but most of all, spending quality time with her grandkids. Her passions included making homemade bread, therapeutic staining and varnishing with her sisters and friends, crocheting and quilting. She also loved volunteering at Holy Angel's School for Taco Tuesday, Bingo, Funerals and the annual cookie walk.

A celebration of Carol's life will be on Saturday December 7, 2013 at Holy Spirit Parish, Holy Angels Church W2796 Hwy KK in Darboy at 12:00 pm with Msgr. Jim Vanden Hogen officiating. Friends may call on Saturday at the church from 9:00 am to 12:00 pm. Online condolences may be expressed at www.wichmannfargo.com.

The family would like to extend a sincere thank you to our special friends Mary Kalies, Mary Weber and the staff of Right at Home, In Home Care for their great compassion and care. Also thank you to the entire staff at Cherry Meadows.

In lieu of flowers a memorial fund has been established in Carol's name.

Hooty Hoo Mom. We will miss you dearly. Love, your family.