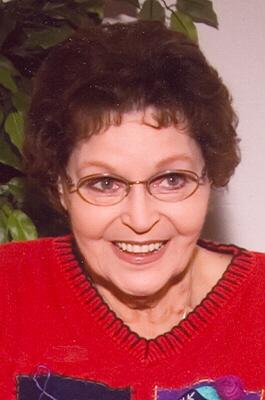 Carol Ann (Markofski) Jones, 78, died peacefully on June 2, 2011, at Cherry Meadows, following a week of visits and prayers by family and loved ones. Carol was born August 23, 1932, in Burlington, Wis, daughter of the late Victor and Holly (Brehm) Markofski. She married the love of her life, Hugh Robert Jones, on Dec 29, 1951, after courting while he served in the United States Navy during the Korean Conflict.

The roll she most relished was that of wife, homemaker and nurturing mother. Her homemade apple pie with butter pecan ice cream, home baked breads and holiday fruit cakes will long be remembered by many, as well as, her love for a fast game of Eucher, Go Fish, Bridge or Cribbage. Everywhere that Hugh and Carol settled, their household was the site for impromptu neighborhood gatherings and visits by neighbor children for popsicles and chats with Hugh in his workshop. Carol was an avid knitter and reader of current events and celebrity news magazines. She found all babies and toddlers joyful and was recently overjoyed at the news of twin great grand babies expected this December, by grandson, Andy Coleman and his wife Suzanne who reside in Florida.

The children would like to offer heartfelt thanks to son- in- law, Thomas Rigden, who was Carol's compassionate care giver throughout her eight year illness and to Christine, her daily caregiver and 'guardian angel' at Oakridge Gardens. The family also recognizes many, many others who assisted her on her journey through the illness of diabetes, including Fox Valley Nephrology, Touchmark Assisted Living, Oakridge Gardens, Running Inc. Transit, the E .R. staff of AMC, the physicians and staff of Fox Valley Surgical Associates, Dr, Chris Sipple, hospice volunteers and employees and Cherry Meadows personnel.

A visitation will take place at 10:00 a.m. on Monday, June 6, 2011 at the Wichmann Funeral Home, Tri-County Chapel, with a prayer service at 12:00 p.m. Inurnment will be in Appleton Highland Memorial Park.

A memorial fund has been established in Carol's name to benefit Cherry Meadows, which is exclusively dedicated to end of life care.