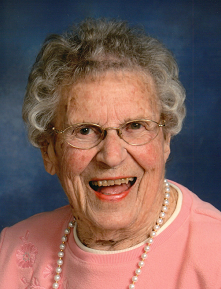 Carol A. (Rogers) Wurdinger, age 98, a lifelong resident of Kaukauna, passed away peacefully with her family at her side, on June 9, 2018.

Carol was born on July 22, 1919, daughter of the late Louis and Clara (Gast) Rogers. She was a 1937 graduate of Kaukauna High School, and married her high school sweetheart Ralph “Lowie” Wurdinger, on October 4, 1941, at Trinity Lutheran Church in Kaukauna, where she had been a member her entire life. Carol was an avid volunteer at Trinity Lutheran Church and School. She was blessed with a beautiful voice and sang for many weddings and funerals throughout the valley, and was a member of Trinity’s choir for over seventy years (2008). She was also a member of the Women’s Aid for seventy-one years and served as vice president, secretary, and treasurer at various times. Carol worked at Thilmany Pulp and Paper for seven years during Ralph’s deployment in World War II, and upon his return, she became a dedicated stay-at-home mom to their two daughters, Donna and Kay. She was a member of the American Legion Auxiliary for twenty-seven years. Carol had a real passion for gardening and taking care of her flowers, supporting the Milwaukee Brewers and the Green Bay Packers, and visiting with her children, grandchildren, and great-grandchildren – right until her death.

Carol is survived by two daughters: Donna (Don) Mitchell of Appleton and Kay (Dennis) Riemer of Kaukauna. Her grandchildren are Todd (Robin) Mitchell of Greenville, Terry (Andrea) Mitchell of Appleton, Shelli (Jason) Fox of Kaukauna, Shawn Riemer of Neenah, Traci (James) Laatsch of Kaukauna, and Toni (Bradley) Laufenberg of Shiocton. She is further survived by her great-grandchildren: Nolan and Lydia Mrotek, Haley and Hannah Laatsch, Carter and Hayden Mitchell, Landon and Bentley Fox, and Asher and Callen Laufenberg. She is also survived by her godchildren: Lynne (Ben) Collins of Kaukauna and Faith (Steve) O’neal of West Palm Beach, Florida; a sister-in-law: Clarice Wurdinger, and several nieces and nephews.

The Christian Funeral Service for Carol will be held at 11:00 AM on Thursday, June 14, 2018 at TRINITY LUTHERAN CHURCH, 804 Grignon Street in Kaukauna, with Rev. David Fleischmann officiating. Burial will be in the church cemetery. Family and friends are invited to gather at the church on Thursday morning from 9:00 AM until the time of the service.

The family would like to thank the staff at Atrium Acute Care of Little Chute for the wonderful care and compassion shown to Carol and her family during this challenging time. A special thank you to their Activities Director and Carol’s friend, Sara, for all the fun activities and discussions she shared with Carol during her stay at Atrium.

Another special thank you to Lynne Collins, Sue Hansel, and Barbara Johnson for always making time for Carol over the years, and for taking the time to support her family as we saw her through her passing. Your kindness will never be forgotten.