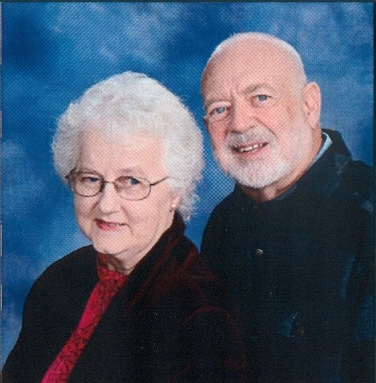 Passed away, May 23, 2016 walking hand-in-hand to their heavenly home. Carlton A. Mahn was born April 30, 1938 to Arnold and Mary (Brouwers) Mahn in Kaukauna, WI. He spent his early childhood exploring the woods. He graduated Kaukauna High School in 1956. Pursing his love of the woods he received a Bachelor of Science Degree in Forestry from Michigan State University. Carlton started his own landscaping business, “Hillcrest Nursery”, supplying foliage and working the land in the Kaukauna area. He continued his business until the early 1980's when he stepped into the direction of raising raspberries.

Judith was born on December 23, 1937 to Elmer and Dorothy (Sorenson) Hecker in Manitowoc, WI. She received her Bachelor Degree in Education from Luther College in Decorah, Iowa. Judith was very devout to her Christian faith. She was a second grade teacher and loved music. she was talented in playing the organ, the piano and also enjoyed leading the choir at church. She was later an aide in the ESL program at Fox Valley Technical College.

Carlton enjoyed the outdoors immensely. He was an avid longbow hunter, crafting his own arrows for the hunt. His hands stayed busy at home tooling leather into pouches, fine wood into tables, or rosemaling bowls and plates for his mother-in-law to sell. He kept track of his bird watching through his many photographs of them in their natural habitats. Carlton in his later years supported the youth of his church as a Sunday School teacher. He was an active member in the NRA and enjoyed fox and deer hunting.

Judith enjoyed teaching. She was an educator at heart. She enjoyed volunteering at schools and her Church. She was a member of “Ladies of Bethany” and the choir director for the Vacation Bible School. She liked to bake with her children and knit items as gifts for her grandchildren. Judith was a kind and patient woman.

Carlton and Judith met in church. She was singing in the Choir and he was attending a service. They often had religious discussions and they were both of a strong faith based background. Together they cultivated their garden and enjoyed their vegetables year round. Carlton and Judith were very proud of all of their children. Their home became the main location for all holidays and celebrations. There was always lots of love in their home with their close knit family.

Judith (Hecker) and Carlton Mahn were married on November 2, 1963 in Manitowoc. In their later years they are known to have done everything together. They are survived by their three children, Daniel (Marlene) Mahn, Sara Mahn, and Nathan (Kendall) Mahn; four grandchildren, Caleb Mahn, Eric Mahn, Rachel Mahn, and Elizabeth Mahn; Carlton's siblings, Lynn (David) Williams, and Karen (Paul) Scott; Judith's sister, Joanne (David) Crehore, and many loving nieces, nephews, other relatives and friends.