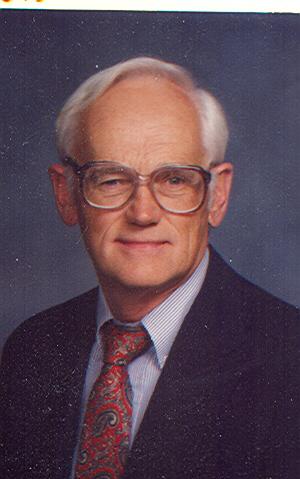 Age 82, of Appleton, passed away unexpectedly at his home Wednesday, November 21, 2007.
Kelly was born December 9, 1924, in the town of Center, the son of Walter H. and Anita (Brockman) Wieckert. He was raised on the dairy farm that was homesteaded by the Wieckert family for four generations. In his youth he was very active with 4H, showing prize-winning Holstein cattle at the Wisconsin State Fair. He also was a beekeeper.
Kelly graduated from Appleton West High School, and he then took a short course in agriculture. For the next several years Kelly grew alfalfa and seed oats to raise monies for tuition to attend the University of Wisconsin-Madison. He and his brother, David, were roommates in college. During his time in Madison, when not in class, Kelly showed real estate. He did not have a car and took the bus, meeting his customers on site. He received his undergraduate degree from UW, and shortly thereafter was united in marriage to Betty Marks on November 27, 1952, at St. John Lutheran Church in Marion.

Kelly and Betty‚Äôs first home together was living above Walsh‚Äôs Drug Store on College Avenue in Appleton. Kelly then began to pursue his lifelong career in real estate, working with H.F. McCarthy Real Estate Company. After the passing of Howard McCarthy, a partnership was formed, Long-Wieckert-Karel Real Estate Company. In the early 1970‚Äôs, Kelly began his own realty, Wieckert Real Estate, which today is located in the office strip on West Spencer Street. The company purchased the Schroeder farm at the corner of Highway 41 and Wisconsin Avenue, which subsequently was developed into the Fox River Mall. This major development took 13 years to complete, and opened in 1984.

The Wieckert‚Äôs owned several gravel pits and Kelly loved spending countless hours in them, he enjoyed this time right up until his passing. Many, many times he would get his car stuck and would try to dig himself out. AAA and Zentner‚Äôs Towing Service formed a relationship with Kelly and knew him well from these trials and experiences. One of Kelly‚Äôs projects included drilling for uranium in the granite formations at Big Falls in the 1960‚Äôs.

One of Kelly‚Äôs favorite contributions to the community was acquiring the properties and serving on the steering committee for the construction of Zion Mutual Homes, a retirement community in Appleton.

Kelly and Betty loved their new home in Appleton where they have lived the past three years. Kelly was very happy with his life and family-he was loved! He was a kind and generous man who had a great attitude. He was very proud of his kids and grandkids. Diabetes was very hard on him, a hard disease to control.

Kelly will be dearly missed by his loving wife, Betty. Next Tuesday would have been their 55th wedding anniversary. Their three children and their families, Steven (Amy) Wieckert, Appleton, Jeffrey (Paula) Wieckert, and Sarah and Adam, of Minneapolis, and Carla (Marion ‚ÄúTom‚Äù) Pasteur, and Lisa and Michael, Ocala, Fla; his two brothers, David (Joan) Wieckert, Middleton, and Walter B.G. (Beverly) Wieckert, Freedom; his sister, Marion Pratt, Fort Worth, Texas; his sister-in-law, Liz Radtke, Neenah; and many nieces and nephews.
Kelly was preceded in death by his parents, a brother Ernst (Alice), a sister, Marguerite (John) Wiegand, and brothers-in-law, Charles Pratt and Marvin Radtke.

Funeral services for Kelly will be at 11:00 a.m. Saturday, November 24, 2007, at WICHMANN FUNERAL HOME, downtown chapel, with Rev. Wendy Wirth-Brock officiating. Visitation will begin Saturday at 9:00 a.m. until the time of services. Kelly will be laid to rest in Appleton Highland Memorial Park.
Memorials in Kelly‚Äôs name may be directed to the Wieckert Family Community Fund, c/o Community Fund of the Fox Valley, Inc., 4455 West Lawrence St., Appleton, 54914, or the American Diabetes Association, Wisconsin Chapter, 2323 North Mayfair Road, Milwaukee, WI, 53226.