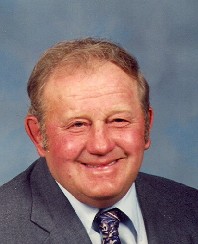 Carl passed away at the age of 82 on Monday, August 31, 2009 at 10:15 AM at Appleton Medical Center. He was born in Grand Chute on January 21, 1927, the son of the late Arthur and Edna (Buss) Lecker. Carl attended Columbia Country School, St. Paul Ev. Lutheran School, and Appleton West High School. On August 27, 1949, he married the former Margaret Sprister and celebrated sixty years together just last week. Carl was a lifelong member of St. Paul Ev. Church and its Men's Club. He was a volunteer fireman for the town of Grand Chute for eleven years, and enjoyed football, fishing and baseball. However, he was first and foremost a farmer, devoting his life to it until his retirement in 1997.

The Christian Funeral for Carl will be held at 11:00 AM on Thursday, September 3, 2009 at ST. PAUL EV. LUTHERAN CHURCH, 302 N. Morrison Street in Appleton with Rev. Paul Jenkins officiating. Interment will be in Riverside Cemetery. Friends may call directly at the church on Thursday morning from 9:00 AM until the hour of the service. A memorial fund for Carl has been established at St. Paul Ev. Lutheran Church.