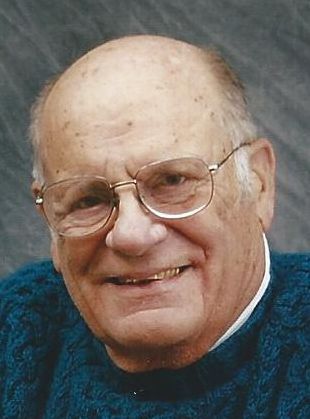 Carleton was born April 28, 1928 in Neenah as the second son of Leo and Genevieve (Horkman) Giese. Growing up on Doty Island, he had a foot in both the Neenah and Menasha communities. He was a graduate of the first class from St. Patrick's Grade School in Menasha and went on to graduate from Neenah High School. Being an “Islander” fit his laid back nature. He enjoyed water-skiing near Riverside Park and fishing with his brother Jack behind their Water Street family home. Carleton proudly served in the US Coast Guard from 1948 to 1952 as an aviation mechanic. An aviation buff, once retired, he volunteered for many years at EAA air shows where he enjoyed meeting pilots from around the world.

On May 3, 1952, he married the love of his life, Mardelle Sawyer. Together they raised three children, actively participated in St. Margaret Mary Catholic Church, ran local businesses, and served their community. He was a leader in the Boys Brigade and a volunteer for St Joe's Food Pantry. Carleton, along with his brother Jack, continued a family tradition at Neenah Brass and Aluminum Foundry. Over 45 years, they built a reputation for producing fine, specialty brass and aluminum casting work. Jack managed the business and Carleton managed production. Favorite NBA foundry work included parts for Harley-Davidson, artistic manhole covers and bronze memorial plaques for Neenah's City Hall, and the USS Wisconsin Battleship in Norfolk VA. Throughout life, Carleton and Jack have been a great team; sharing in family and business with a deep and abiding brotherly love.

Funeral Services will be held at 11:00 a.m. Monday, May 19, 2014 at St. Margaret Mary Church, 610 Division Street in Neenah. Fr. Michael Ingold will officiate. Friends may call at the church from 9:00 a.m. until the time of the Mass. In lieu of flowers, memorials are being established to St. Margaret Mary or St. Joseph Food Pantry in his name.

Carleton's family would like to extend a heartfelt thanks to the staff at Island Shores and Affinity Hospice for their care and compassion.

Carleton filled his life with love: for God, family, friends, work and community. Add to that a passion for the Packers, golf, bowling and maintaining a perfect lawn. He was a creative genius with PVC pipe. A cheerful guy, his motto: “Twenty years from now, who will know the difference?” Carleton greeted people with a firm handshake, and a genuine warmth. Listening to him chuckle as he told a joke was often as funny as the joke itself. He wasn't one to hurry (“keep your skivvies on”), which made running errands with him a leisurely affair. Carleton Giese was a regular guy who lived life like a true hero. Dad, you will be greatly missed.