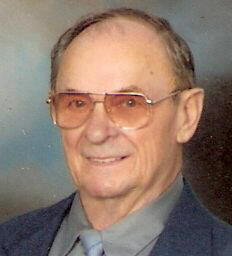 Carl Bruehl, 87, Kaukauna, passed away on Thursday November 6, 2008 at St. Elizabeth's Hospital, Appleton. Carl was born on Jan. 11, 1921, to Henry and Elizabeth (Geiger) Bruehl in Appleton.

He served in the United States Army in Europe and North Africa during World War II with members of the 40th Combat Battalion Engineers. Before shipping off to the war, Carl married Elizabeth (Betty) Maley of Kaukauna at Fort Pierce, Florida, on Valentine's Day, Feb. 14, 1943. They celebrated their 65th Wedding Anniversary this past February with many friends and family.

Carl graduated from St. Joseph School in Appleton and after the war ended, he completed vocational training for carpentry. He worked as a carpenter until he retired from Fred Piette Construction in 1983.

Carl courted his future wife, Betty, on his 1938 Harley Davidson and they enjoyed many years traveling around Wisconsin in the 1940s with the Appleton Motorcycle Club, of which Carl was a Charter Member. Despite many offers, he could never part with his canary yellow Harley and it remains in the family.

Carl and Betty had a cottage on the Oconto River near Chute Pond for more than 30 years. He spent many relaxing hours golfing, fishing from his dock, inflating inner tubes for the kids to float down the river, roasting corn-on-the cob for family and friends—and occasionally, with enough coaxing, playing “Lilli Marleen”on his accordion while sitting around the campfire.

When Carl was 83 years old, he traveled to Germany for the first time since WWII, with several other family members for the 150th anniversary of his grandfather's immigration to the United States with what was then the entire village of Sespenroth, Germany. He and his family were guests of the locals for a celebration that included many German dignitaries and U.S. consulate representatives.

Funeral Mass for Carl will be held at 11:00 A.M.. on Monday, November 10, 2008 at Holy Cross Catholic Church (309 Desnoyer Street) With Father Marty Fox officiating. Friends will be received at the church from 9:00 A.M. until the time of Mass. Interment will be in Holy Cross Cemetery. In lieu of flowers, a Memorial is being established.

The family wishes to thank the many wonderful staff members at St. Elizabeth Hospital and dad's long-time primary care physician, Dr. Scott, for their care and concern.