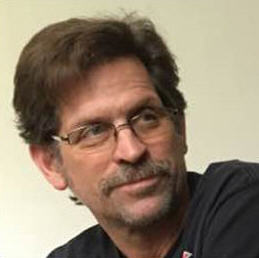 Born in 1965 in Framingham, MA, he was a beloved son, brother, husband, father and grandfather. He is survived by his wife of 32 years, Rhonda (Schaffer) Elliott, daughter Angie Elliott, son Ian Elliott, daughter-in-law Ashley (Brueser) Elliott, granddaughter Luna Elliott, all of Appleton, WI; brother Glen Elliott, sister Brenda (Elliott) Proctor and brother-in-law Gordon Proctor, of Ohio; sister-in-law Tammy (Schaffer) Trujillo, brother-in-law Brad Trujillo of CO; and many other cousins, nieces, nephews, and friends. He was preceded in death by his parents, Richard Elliott and Lois (Nelson) Elliott of the Milford, MA area.

Carl was a welder and worked at a variety of companies in the Appleton, Green Bay and Sturgeon Bay area. He had a great sense of humor and loved puns. He was an avid outdoorsman and enjoyed fishing for muskies. His passion was guitars and music, and he loved playing guitar with the local band Deliverance.