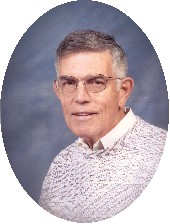 Age 75, returned to his Heavenly Father on Tuesday, February 8, 2005, surrounded by his devoted family. Carl was born in Kimberly on June 29, 1929, son of the late Anton and Christine (Kamps) Vanden Boom. Carl was a graduate of the Kimberly High School and also attended St. Norbert College in DePere. During the Korean Conflict, Carl served his country as a member of the United States Army. Following his discharge, he married the former Patricia Dupont in Kimberly; she survives.

Carl worked at the Kimberly Clark Corporation for over forty years, working at locations in Kimberly, Chicago, and Neenah. In 1991 he retired from the Quality Control and Research and Development Department.

Carl lived his extraordinary life faithfully serving his Lord, his family, and his community sharing his Christ-like gifts in many ways. He loved young people, and wherever he and Pat resided, Carl shared his faith by teaching religion classes to future generations. For many years, Carl and Pat were very active and faithful members of Holy Name Parish in Kimberly where he served on the Parish Council and as a Trustee.

His family will forever recall and treasure Carl‚Äôs love, patience, tenderness, compassion, humility, gentle ways, and his willingness to serve. Most of all, Carl‚Äôs unwavering desire to serve his Lord was manifested as he eagerly shared his faith and his tender ways with everyone whom he became acquainted with.

Community members will remember his membership in the Kimberly Kiwanis Club where he previously served as president, and as a member on the Heart of the Valley Sewerage Commission and the Papermakers Booster Club. Carl was inducted to the Kimberly High School Hall of Fame for his athletic achievements over the years and was also a member of Toastmasters International.

Carl truly enjoyed all of God‚Äôs creation, and looked forward to time spent with his family at the cottage on Lake Winneconne. There he enjoyed fishing, swimming, sports with his grandchildren, watching and feeding the birds, visiting the neighbors and just generally ‚Äúputzing around‚Äù at the lake.

The funeral liturgy for Carl will be held at 12:00 Noon on Saturday, February 12, 2005 at HOLY SPIRIT PAIRSH ‚Äì KIMBERLY, 600 E. Kimberly Avenue with Fr. Tom Pomeroy officiating. Interment will be in the parish cemetery. Friends may call directly at the church on Saturday from 9:00 AM until the hour of the services.

Carl loved the Word of God and daily honored his Lord and Saviour by living the message of his most treasured scripture verse:

‚ÄúThis is what the Lord asks of you, only this: to act justly, to love tenderly, and to walk humbly with your God.‚Äù Micah 6:8