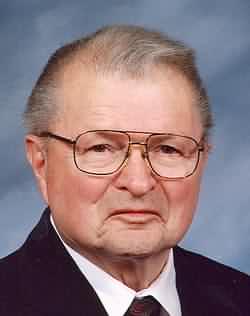 Calvin Walter Klevesahl, age 82, of Appleton, died on Sunday, May 13, 2007, at Brewster Village. Calvin was born on September 12, 1924, in the Town of Lessor in Shawano County, the son of Robert and Hattie (Richter) Klevesahl. He married Joan Schwenke on December 18, 1948, in Clintonville. Calvin was an installer for Western Electric and later an engineer for Wisconsin Bell, retiring in 1982 after thirty years of service in the telephone industry. He was a veteran of World War II, proudly serving his country in the U.S. Army in Germany and Belgium. Calvin enjoyed golf, bowling and read extensively about WW II. Survivors include his wife of 58 years, Joan; his children, Gary (Lucretia) Klevesahl, Wheaton, Illinois; Karen Larson (special friend, Mick Raboine) , Green Bay; Lindsay (Barbara) Klevesahl, De Pere; and Mark Klevesahl, Appleton; his grandchildren, Michelle Klevesahl, Andrea and David Larson, Paul Klevesahl and Kelly Bonfigt (fianc√©e, Corey O‚ÄôConnell); and his great granddaughter, Chloe O‚ÄôConnell; his brother, Robert (Marilyn) Klevesahl; his brother-in-law, Donald (Elverna) Schwenke, Clintonville; and his sisters-in-law, Doris (Henry) Steenbock, Clintonville, and Ruthann Buelow, Shawano. He was preceded in death by his brother, Howard (Audrey) Klevesahl, an infant brother and his brother-in-law, Donald Buelow. Funeral services will be at 11:00 a.m. on Wednesday, May 16, 2007, at GOOD SHEPHERD LUTHERAN CHURCH, 2220 East College Avenue, Appleton, with Rev. Martin E. Koeller and Rev. Timothy Seabaugh officiating. Entombment will be in Highland Memorial Park, Appleton. Friends may call directly at the church on Wednesday from 9:30 a.m. until the time of services. The family would like to extend a sincere thank you to the caregivers, nurses and residents at Brewster Village for their loving care.
WICHMANN FUNERAL HOME
537 North Superior Street
Appleton 739-1231
www.wichmannfuneralhomes.com