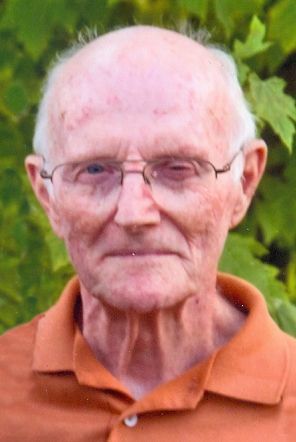 Byron Edward Derricks passed away on November 20, 2015. He was born in Kaukauna, Wisconsin on January 29, 1928 to the late Edward and Loretta (Feller) Derricks.
While still in high school, he enlisted in the United States Navy. He went to boot camp at Great Lakes Naval Station in Illinois. After boot camp, he went to Rhode Island and became part of a Seabees unit. He was assigned to a construction battalion in Sasebo, Japan during World War II. He returned to Kaukauna after receiving an honorable discharge. He complete his education along with other Kaukauna veterans returning from the war. On September 27, 1947, Byron married Rosemary Verhagen at St. Paul's in Wrightstown.
Byron was employed by the Kaukauna Area School District in the building and grounds department until his retirement in 1991.
Byron was a self-taught plumber, carpenter, electrician and craftsman. With these skills he built two homes. He also built much of the furniture for these homes and his lake house in Winneconne. Byron's skills were sought after by colleagues, as they often asked him to assist with their own carpentry projects. The entire family enjoyed working on various projects with Byron, including remodeling as well as furniture and deck building.
In addition to being a craftsman, Byron enjoyed anything to do with boating. Whether it was a canoe, a row boat, or his cabin cruiser “Fantasy”, one of his favorite places to be was on the water. Much of his free time was spent on or near Lake Poygan in Winneconne.
Byron is survived by his wife, Rosemary Derricks; son, Bill Derricks, and daughter-in-law, Mary (Wiegand) Derricks (Kaukauna). In addition, he is survived by four grandchildren, including a set of twin girls: Jennifer Derricks (Rockford, IL), Greg Derricks (Sobieski, WI), twin Jill (Chris) Nighbor (Lake Wylie, SC) and twin Julie (Jason) Franken (Wheaton, IL). There are five great-grandchildren, including two sets of twins. Connor and twins, Ella and Mason Nighbor (Lake Wylie, SC) and twins William and Clara Franken (Wheaton, IL).
Also surviving are a niece and three nephews: Julie and husband CP Maloney (Rochester, NY), Mark Notbohm (Pennsylvania) and Charles Warren (La Fayette, NY).
Byron was preceded in death by his parents, Ed and Loretta (Feller) Derricks; a sister and brother-in-law Delores and Will Notbohm and their daughter, Mary Warren. Also preceding Byron were Rosemary's parents John and Kathryn (Van Deurzen) Verhagen; her six sisters and four brothers and spouses: Marie (Lewis) Clark, Mildred (Roger) Powell, Norbert (Slavina Schmidt) Verhagen, Agnes (John) Penterman, Helen (Ray) Springstrom, Clara (A. John) Rutten, Leo (Grace Haskins) Verhagen, Ray (Martha Lindsley) Verhagen and Ray's twin Raphael (who died in infancy) and Eunice (Milton) Borta.
The Funeral Liturgy for Byron will be held on Wednesday, November 25, 2015 at 11:00 am at HOLY CROSS CATHOLIC CHURCH, 309 Desnoyer Street, Kaukauna. Visitation will be held on Wednesday starting at 9:00 am until the time of the service. Interment will be held at Holy Cross Cemetery. In lieu of flowers, a memorial fund has been established in Byron's name. Online condolences may be expressed at www.wichmannfargo.com.
The family would like to thank Dr. Johnson and the staff at the Appleton Medical Center for their care and concern.