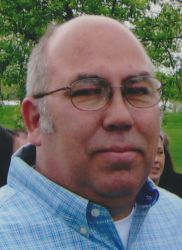 Brian Curtis Owen, 54, Appleton, passed away on March 21, 2014 at his home with his family at his side. Brian was born on November 27, 1959 to James B. and Karen (DeFord) Owen in Milwaukee. He was a 1978 graduate of Appleton East High School. On June 10, 2001 Brian and Connie Probst were married in Niagara Falls. Brian was a classic car enthusiast. He owned a classic Corvair and was a member of the Corvair Club. He also loved the Iola Car Show and never missed it. He worked at Automotive Supply as a machinist for over 20 years where he made many lifelong friends. As he traveled throughout the United States with Connie, they were able to visit many notable landmarks. He was active politically and enjoyed traveling to support the things he believed in. Brian had a passion for fixing things; he enjoyed a challenge and was always willing to help friends and family as needed. He was enthusiastic about science-fiction and maintained a strong and vivid imagination even as his condition worsened. His love for antiques and olden day luxuries was obviously seen through the décor of the Owen home.

Brian is survived by his Wife Connie Owen, daughter Ashley (Josh Rodriquez) Owen, step-mom Dayne Owen, step-brother Berke Junion, step-son Daniel Younger, step-daughter Stefanie (Alex Fude) Younger, Connie's parents; Jim and Mary Lou Probst and her three brothers and their spouses, his faithful, furry friends Emma and Harry, as well as his Aunts, Uncles and Cousins on both the Owen and DeFord side of his family and many good friends.

He was preceded in death by his parents James B. Owen and Karen (DeFord) Owen.

Memorial Services for Brian will be Friday March 28, 2014 at 5:30 pm at Wichmann Funeral Home, 537 N. Superior Street, Appleton. Visitation will be Friday at the funeral home from 3:30 to 5:30 pm. For more information and to express online condolences please visit www.wichmannfargo.com and sign the online guestbook.

A memorial fund will be established in Brian's name. The family would like to thank Doctor Guenther and the entire staff at the Martha Siekman Cancer Center as well as the Hospice Nurses and Staff.