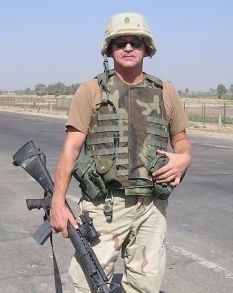 Robert “Bob” Erickson, 59, passed away from complications of leukemia (AML) on October 27, 2015. Bob was born on December 25, 1955, in Rhinelander, Wisconsin, son of the late George and Betty (Clairmore) Erickson. He was a graduate of the Rhinelander High School, and also received a Culinary Degree from Nicolet Area Technical College. Bob served in the Wisconsin Army National Guard for 33 years, (1976-2009) and Active Duty AGR for 22 years. During his service Bob was involved in a number of humanitarian missions taking him to Germany, Panama, and Nicaragua. He was also deployed in support of Operation Iraqi Freedom from 2003 to 2004 where he received a Bronze Star for his role as Battalion Supply Sergeant. Bob retired at the rank of Sergeant First Class in March of 2009. Following his military retirement Bob took a more active role in raising his two young sons Eligh and Kayden. Bob took enjoyment in cooking, deer hunting, and spending time with family and friends. He greatly enjoyed the gatherings with the AmVets Post 724 in Rhinelander where he made many life-long friends, including Jeff Kennedy, Mark Durkee, Bob Turk, and many, many more. Bob also loved the many unforgettable times, Packer games, camping trips, and get-togethers with best friends Rick and Jen Kondell.

Services and full military honors are planned 2:00 PM on Friday, November 6, 2015 at Faith Lutheran Church, 601 E. Glendale Avenue in Appleton, with Rev. Aaron Rosenau officiating. Family and friends are welcome to gather at the church on Friday, from 12:00 noon until the hour of the service. In lieu of flowers the family requests donations in Bob's name to a memorial fund which is being established. For more information or to share a memory of Bob, please visit www.wichmannfargo.com.