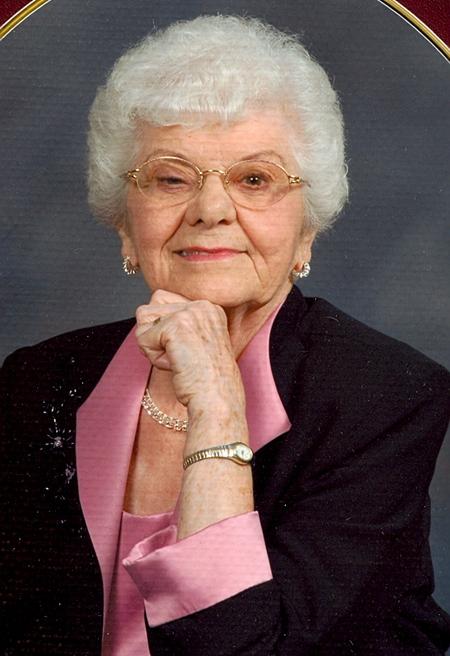 Blanche P. Vandenberg, age 90, of Freedom, slipped peacefully from the loving arms of her family to her eternal home in Heaven on July 6, 2010. She was born on April 25, 1920 in Freedom, the daughter of the late Joseph and Mary (Romenesko) Conrad, where she was a resident all of her life. Blanche married the love of her life, Quentin Vandenberg on her birthday in 1946 at St. Nicholas Catholic Church, Freedom. Together they shared 57 beautiful years of life, love and laughter. Blanche worked at the chair factory, Tuttle Press in Appleton and the Freedom Elementary School. She was a member of the Christian Mother's Society, the Freedom VFW Post 7692 Auxiliary and also the Red Hat Society. Blanche was a faithful member of St. Nicholas Catholic Church, Freedom.

Welcoming her “home” are her husband, Quin, who preceded her in death in 2004, her son, Terry in 2001 and grandson, Ryan Hooyman in 2009. She was preceded in death by her four sisters: Anna Hietpas, Marion Jansen, Rosella Vandenboom and Agnes Bergman and her six brothers: Walter, Joseph, John, Earl, William and Norbert Conrad.

The funeral liturgy for Blanche will be held at 1:00 pm on Friday, July 9, 2010 at ST. NICHOLAS CATHOLIC CHURCH, Freedom with Father Dave Hoffman officiating. Interment will take place in the parish cemetery. A time of visitation and support will be held on Friday at the church from 10:00 am until the time of mass. In lieu of flowers, a memorial fund has been established in her name.

Blanche's family would like to extend a heartfelt thank you to the staff at Brewster Village, Dr. Deborah Schultz and ThedaCare at Home Hospice for their compassionate love and care.