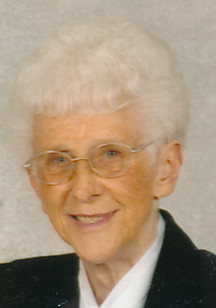 Beverly Jean Winters, age 82, of Freedom, passed from her earthly life to her Eternal Life on March 30, 2012, at Grand Horizons in Appleton with the love of her life, Bob, close by her side.

Beverly was born on December 19, 1929, to Ray and Leona Wichman. She was the only daughter in a family of five brothers.

During Bev's life many things were special to her, infants and small children, the flowers she planted and cared for every year, and her Church. Beverly was a very active member of St. Peter Ev. Lutheran Church her entire life, never missing a church service. During the last two years of her life, her church needs were filled by Pastor Dustin Sievert at the monthly services he performed at Grand Horizons.

The most important things in her life included her loving husband, family and friends, especially her grandchildren and great grand children.

She was preceded in death by her parents and three brothers: Raymond Wichman, Earl Wichman, and Floyd Wichman.

Funeral services will be at 11:00 a.m. on Tuesday, April 3, 2012, at ST. PETER EV. LUTHERAN CHURCH, N2749 French Road, Freedom, Wisconsin, with Rev. Dustin Sievert officiating. Friends may call at the Wichmann Funeral Home, Appleton, on Monday from 4:00 p.m. to 7:00 p.m. and again directly at the church on Tuesday from 9:30 a.m. until the time of services. Interment will be in St. Peter Ev. Lutheran Church Cemetery. A memorial has been established in Bev's name.

The family would like to give a special thanks to the staff at Grand Horizons for all the loving care, hugs and kisses they showered on Bev over the last two years.

Online Condolences can be expressed at www.wichmannfargo.com