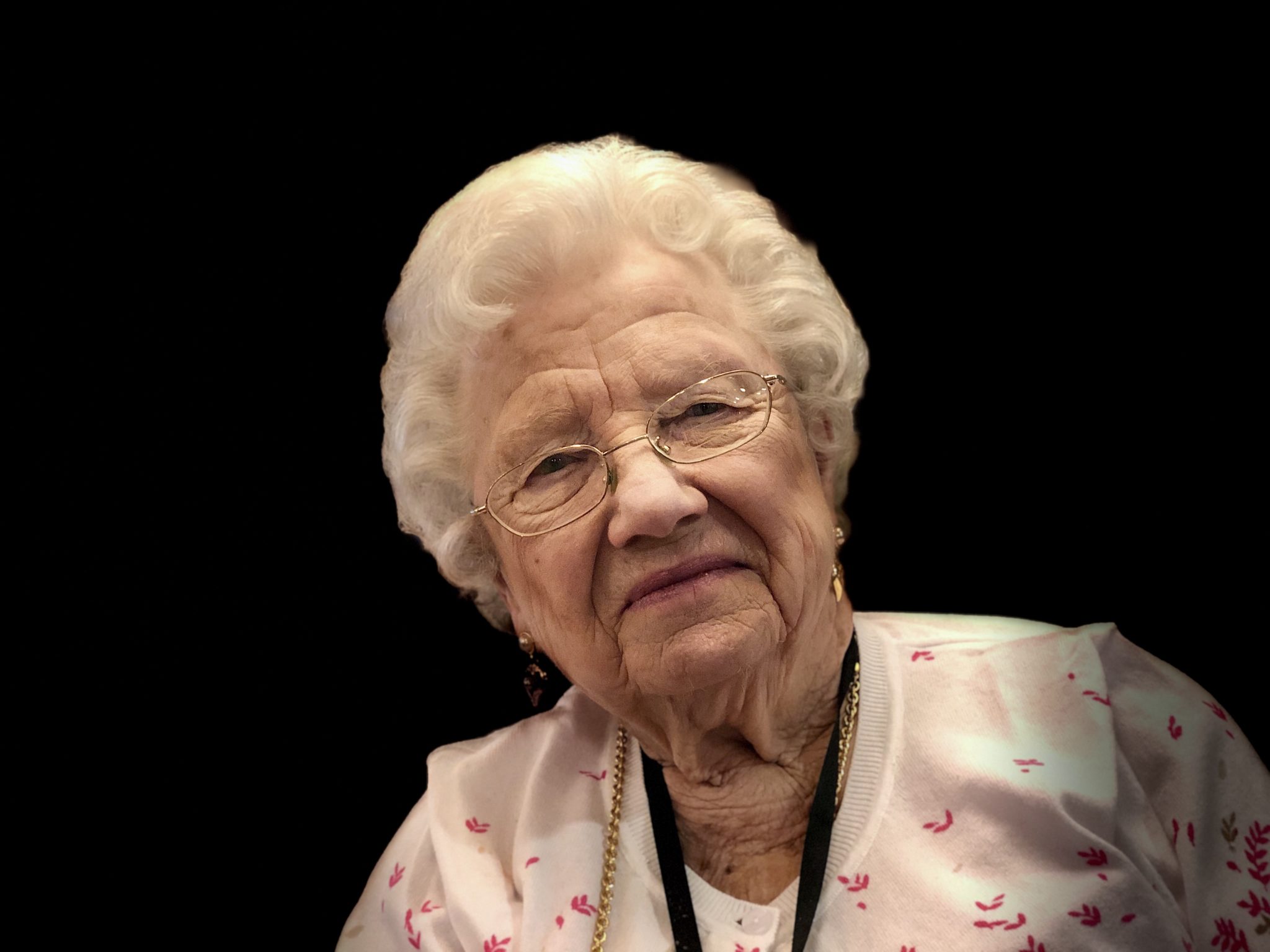 On May 1, 2020, Betty Ellen (Penny) Hogfeldt passed away peacefully at the age of 92, at Prairie Home Assisted Living in Menasha, WI. Betty was born on August 19, 1927 to Henry and Edith (Johnson) Luckow in Belvidere, Illinois. She graduated from Belvidere High in 1945. She was known as “Penny” to all who knew her outside her immediate Luckow family. She grew up in Belvidere along with her eight siblings, and always complained that as the second in line and oldest girl, she always got the bathwater last. In spite of that, Betty often joked that of all her siblings, she was the prettiest.

Betty married John Robert (Bob) Hogfeldt on September 4, 1947 not long after they met at the Belvidere public pool, where Bob was a handsome lifeguard. Their wedding reception cost $27 (That’s $390 in today’s dollars). They lived briefly in Beloit, Wisconsin, and then Pullman, Washington, while Bob completed his education. The couple settled in Rockford, Illinois where they raised their three children, Jay, Judy, and Jill.

Growing up in wartime, Penny never realized her dream to become a nurse. However, she was employed at a bank in Belvidere, and later a furniture store. Finally, after many years at home raising her children, she worked alongside her husband as head bookkeeper at Commercial Mortgage & Finance Co. in Rockford until her retirement in 2001. Penny enjoyed interacting with customers and co-workers and was known for treating people with compassion and respect. She was a member of Bethesda Covenant Church in Rockford and participated in the Katherine Circle. The Moose Club in Belvidere was where she and Bob enjoyed getting together with friends and family, eating and dancing the night away to the homegrown music of local bands.

Penny and Bob spent summer vacations with family and friends at Stormy Lake in Wisconsin, and shared cherished time together at their condo in The Wisconsin Dells. They traveled extensively including trips to Florida, Mexico, Costa Rica, Hawaii, and Tahiti. Penny was an expert cook. When her children packed up her house, they discovered literally hundreds of cookbooks stashed in every drawer and closet. Growing up in a large family during the Depression, Penny was always a bit of a spend thrift. She proudly carried the same purse for 25 years, purchased at Sam’s Club on their opening day. An essay by Judy is devoted to the recently revealed contents of (said) purse.

Penny’s beloved husband, Bob, passed away in 2013 shortly after the couple became residents of Prairie Home Assisted Living “House of Joy” in Menasha, Wisconsin. Penny continued her residence there with her daughter Jill living nearby in Appleton and with Jay and Judy visiting frequently. Even with the progression of dementia, Penny always looked like a million bucks. She applied her make-up every morning including her “cinnamon” lipstick, and wore her earrings and pearls every day. She had her magnificent silver hair “repaired” weekly, and her nails were always polished. But sadly, Penny frequently asked, “Where’s Bob?”

Penny’s life with dementia became the inspiration for a theatrical play When I Get Home written by her daughter, Judy. It was scheduled to be performed by Limestone Stage in Lockport, Illinois just days prior to her passing, but the event was postponed indefinitely due to Covid-19. In the latter years of her life, as the disease took its toll, Penny was always waiting to go home. She is finally home.

The family wishes to thank all the amazing caregivers and volunteers at Prairie Home Assisted Living, and ThedaCare at Home Hospice who took care of Penny throughout her seven-year stay.

Due to Covid-19, Penny’s memorial service in Menasha must be private, but will be live-streamed from the Wichmann Funeral Home, Tri-County Chapel at 1:00 PM on Thursday, May 7th, 2020. A Link to the live-stream or recording of the service will be available on the website www.wichmannfuneralhomes.com. In lieu of flowers, a donation in mom’s name to Alzheimer’s research at https://act.alz.org/site/Donation or to your local Salvation Army would be appreciated.