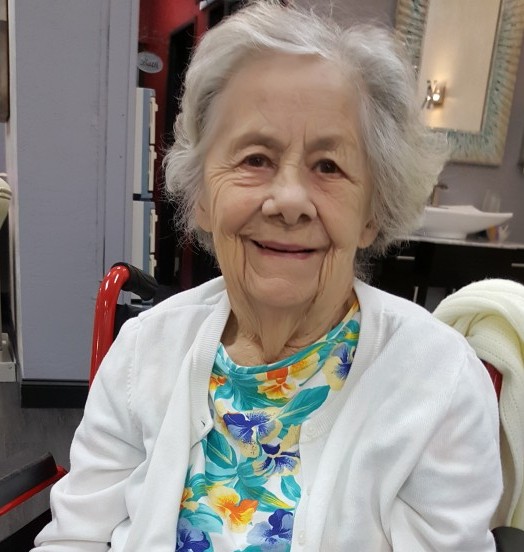 Bette Crane passed away peacefully in her sleep at the age of 96 on Monday, January 6. She was born on March 10, 1923 to the late Patrick and Lucy (Bourassa) Keapock. In 1941 she graduated from Menasha High School. She married Doug Crane in 1949 and they remained together until his death in 2016.

Bette loved to sing, dance, and play the piano. She was a long-time member of the Silver Foxettes Dance Group and Martin Ruge’s tap dancing group. Bette also sang in the St. John’s and St. Mary’s church choirs in Menasha for many, many years. She was an avid film buff, especially films from the 1930’s, 1940’s, and 1950’s and even worked at 20th Century Film Studios in the mid 1940’s.

Bette worked many different jobs in her life, but her favorite job was mother, grandmother, and great-grandmother to her four children, seven grandchildren, and five great-grandchildren. During her retirement, she enjoyed traveling around the United States with Doug, especially trips to Hawaii, Alaska, California, South Dakota, and New York. She even traveled to Ireland to explore her Irish ancestry.

Bette was preceded in death by her husband, Doug, her parents, Patrick and Lucy Keapock; her two beloved sisters Eileen Coonen and Phyllis Maas, her son-in-law Chuck Mielke as well as five brothers-in-law and two sisters-in-law.

The funeral service for Bette will be held at 11:00 AM on Monday, January 13, 2020 at Wichmann-Laemmrich Funeral Home (312 Milwaukee St., Menasha) with Deacon Don Schultz officiating. Visitation will be held from 10:00 AM until the time of service.