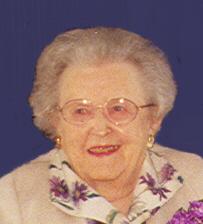 Bessie Stark, age 92 years, of Appleton, formerly of Decatur, Illinois died on Wednesday, November 8, 2006 at the Rennes Health Center. She was born on September 24, 1914 in Peoria, Illinois, the daughter of the late A.P. and Beulah (Campbell) Cummings. Bessie married Alvin Stark on August 12, 1934 in Decatur, IL. The couple lived in Lewistown, Montana for four years and then made their home in Decatur. Bessie moved to Appleton to be with her family in 2001.

She is survived by her son, Rick Stark of Appleton; grandchildren: Rick (Jodi) Stark, Jr. of Stevens Point, Jane (Brian) Schumaker of McFarland and Dan Stark of Appleton; great grandchildren: Ashley and Garrett Stark, Megan and Caitlyn Schumaker and her brother Edwin (Gwen) Cummings of Decatur. Bessie is further survived by nieces, nephews, other relatives and friends. She was preceded in death by her husband Alvin, son and daughter-in-law John and Carolyn Stark and her daughter-in-law Nancy Stark.\

The funeral service for Bessie will be held at 10:00 a.m. on Saturday, November 11, 2006 at Brintlinger and Earl Funeral Home, Decatur, Illinois with Rev. Ray Offermann officiating. Interment will take place at Marrowbone Township Cemetery in Bethany, IL. Friends may call at the funeral home on Saturday from 9:00 a.m. until the time of service. Memorials are appreciated to the Rennes Health Center Activity Fund.