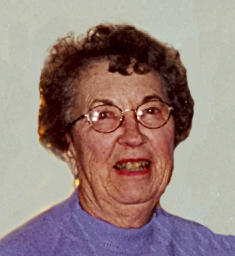 Bernice De Bruin, age 96, passed away on Thursday, October 4, 2012 at St. Paul Home in Kaukauna. She was a lifelong Kimberly resident and a member of St. Paul Ev. Lutheran Church in Appleton. Bernice Matilda Mayer was born on June 17, 1916, at High Cliff, Wisconsin, daughter of the late Paul and Minnie (Zanders) Mayer. She grew up on the family farm at High Cliff until 1928, when the family moved to Spring Street in Appleton. Bernice attended the Appleton High School, and graduated in 1934. On June 17, 1940, she married Harold “Bomber” De Bruin in Appleton, where they lived for five years. They then moved to Kimberly where they raised their children, David and Valerie.

Bernice and Harold spent most of their lives in their home on Sidney Street, enjoying many happy times together. They enjoyed bowling, golfing, and traveling. Bernice was a wonderful seamstress, and could usually be found in the backroom den either sewing, knitting, or working on some other craft item. Bernice also loved to tend her vegetable and flower gardens.

In addition to her parents, she was preceded in death by her husband Harold on November 14, 1982, as well as four sisters: Mildred (Bill) Swichtenberg, Viola (Walters) Frakes, Irene (Erv) Helms, and Mabel Mayer; and a brother: Reuben Mayer.

A private service for the comfort of the family was held at Jansen Fargo Funeral Home in Kimberly. Bernice was placed at rest at Highland Memorial Park, alongside her husband, Harold.