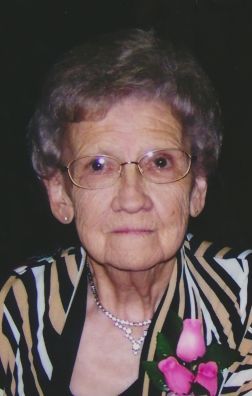 Bernice was born on June 14, 1928 to John and Johanna (VanLanen) Ambrosius in DePere. On October 28, 1948 she was united in marriage to William Van Wychen at St. Boniface Catholic Church. Bernice was a member of Holy Cross Catholic Church and Christian mothers. She was very active in her church and helped serve funeral luncheons for over 35 years. Her family was the most important thing to her and she was especially proud of her seven grandchildren and seven great grandchildren. The times they spent together will always be treasured especially the summer vacations at Crooked Lake.

The funeral liturgy will be held on Friday, March 6, 2015 at 11:30 AM at HOLY CROSS CATHOLIC CHURCH, 309 Desnoyer St., Kaukauna, with Fr. Tom Pomeroy officiating. A time of visitation will be held on Thursday, March 5, 2015 from 4:00 until 8:00 PM at the Fargo Funeral Home with a prayer service at 7:00 PM and on Friday from 10:00 AM until the time of the service at the church. Online condolences may be expressed at www.wichmannfargo.com.