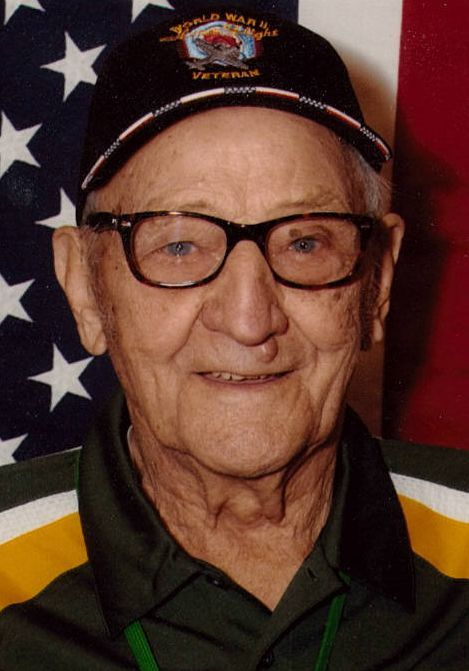 Bernard Richard Trader, age 95, of Menasha, passed away on Tuesday, March 28, 2017. He was born on June 14, 1921 in Menasha to the late Antone and Martha (Arndt) Trader. Bernard graduated from Menasha High school in 1940; his class was the first graduating class from the new high school building.
Following graduation Bernard was drafted into the U.S. Army. His enlistment took him to the beaches of Normandy, June 6, 1944. He survived D-Day where he was trapped behind enemy lines for three days in WWII. Bernard was given the opportunity to travel to Washington D.C. along with the Old Glory Honor Flight in October 2015. It was a fantastic experience for him and he was welcomed home by many family and friends celebrating his service to our country.
After serving his country he returned home to Menasha where he met LaMoine Raehl. The two were married on February 17, 1947 until her passing on January 1, 1999.
Bernard worked for many years at the Menasha Corporation. In his free time he enjoyed hunting, sturgeon spearing, fishing in Canada (45″ Northern) with his son Charlie and his wife Kristen and fishing with his son Tony and his wife JoAnn in Boulder Junction, building wood bird and duck houses, and spending time up North with family. He also always looked forward to the holiday meals at the home of his son, Jim and his wife Deby. In his retirement, Bernard could be found at “the shop”, delivering parts, drinking coffee and keeping an eye on things or solving the world's problems at Jefferson Park. He loved nature, watching wildlife, tending to the garden and being outdoors (as long as there wasn't football to watch on TV). His family and friends will remember him as a loving husband and devoted father.
He is survived by his four sons, Jim (Deby) Trader of Menasha, Tony (JoAnn) Trader of Neenah, Charlie (Kristen)Trader of Suring and Danny (Cindy) Trader of Waupaca; five grandchildren, Heather, Travis, Nick, Casey and Christine; ten great-grandchildren and his two sisters, Marce Gartzke and Loraine Hardtke. He is further survived by many other nieces, nephews, other family members and dear friends.
In addition to his parents he was preceded in death by his wife, LaMoine, whom he shared fifty-two years of marriage with and several other dear family members.
The funeral service will be held on Saturday, April 1, 2017 at 12:30 p.m. at LAEMMRICH FUNERAL HOME, 312 Milwaukee Street in Menasha. Visitation will be held on Saturday starting at 9:30 a.m. until the time of the service. Interment will be held at St. John's Cemetery in Menasha. Military honors will be performed at the cemetery. In lieu of flowers, Bernard's family will be forwarding memorials to Affinity Hospice. Online condolences can be expressed at www.wichmannfargo.com.
Bernard's family would like to thank the staff at both St. Elizabeth Hospital and Manor Care for taking such wonderful care of Bernard. They also would like to acknowledge Affinity Hospice for the compassion shown for Bernard and his family; it did not go unnoticed.