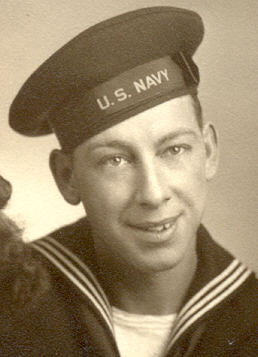 Bernard Buchberger, of Kimberly, age 86 years, died peacefully on Saturday, May 26, 2007 at Appleton Medical Center surrounded by his family. He was born October 12, 1920 in Kaukauna to the late John and Elizabeth (Trottier) Buchberger. He attended Kaukauna High School. On July 4, 1942 he married the love of his life Florence Kuepper. Bernie served his country in the U.S. Navy during WWII from 1943 ‚Äì 1945, in the Pacific arena. He was a faithful member of Holy Spirit Parish, Kimberly and a member of the William Verhagen Post #60 of the American Legion, Kimberly. Bernie was employed by Thilmany for 33 years, retiring in 1984. He enjoyed traveling, playing cards and shopping for lumber at Menards. His refuge was his workshop, where he created many treasured memories for family and friends. Bernie loved his family, friends, neighbors and the Packers.

The memorial mass for Bernie will be at 5:00 pm on Thursday, May 31, 2007 at HOLY SPIRIT PARISH ‚Äì KIMBERLY, 600 E. Kimberly Ave., with Fr. Jim Lucas officiating. Inurnment will take place at 10:00 am on Friday, June 1, 2007 at Holy Angels Cemetery, Darboy. Military honors will be provided by the members of William Verhagen Post 360 of Kimberly. The family will receive friends at the church on Thursday from 3:00 pm until the time of mass. In lieu of flowers, a memorial fund has been established in his name.

The family wishes to thank the staff of the Collaborative Care Unit, Dr. Jessica Johnston and Dr. Norma Turk for their care and compassion.

Dad, we‚Äôll try to keep our heads screwed on straight! We love you and will miss your sense of humor and enduring love.