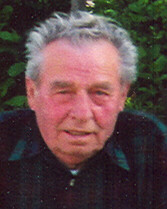 Bernard Dejk, age 82 passed away Monday, September 4, 2006 at the Appleton Medical Center, following a brief illness. Bernard was born March 8, 1924, son of the late Felix and Agata Dejk. Ben married Annie Elise Dejk on April 1st, 1950 in Butzbach, Germany and she preceded him in death on July 22, 2000. He lived in Europe until 1955 when the family relocated to Canada. In 1962, the family moved to Appleton. For most of the years since that time, Ben had been employed as an installer for Brennan Fraser Roofing and Siding, and in his later years also worked part-time at Riverside Cemetery in Appleton.

The family would like to thank all of the special nurses and staff at Appleton Medical ICU for their support and care they gave to our father and us during this difficult time.

Corinthians 5:1 ‚ÄúNow we know that if the earthly tent we live in is destroyed, we have a building from God, an eternal house in heaven, not built by human hands