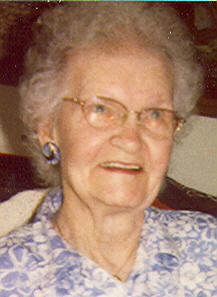 Age 97, formerly of Appleton, passed away on September 7, 2011 at Manitowoc Health and Rehabilitation Center. Bernie was born on June 2, 1914, in Chippewa Falls, WI, the daughter of the late Charles J. and Francis M. (Bergeron) Cardinal. She married Morris J. Yentz on September 14, 1940, at St. Joseph Catholic Church, Appleton. He preceded her in death on December 17, 1995. Bernie enjoyed being a wife and mother, along with sewing, canning, being a great cook, and many other hobbies. While living in Appleton, Bernie was an active member of St. Joseph Catholic Church.

Survivors include a daughter, Carol (Don) Moonert of Two Rivers; a grandson, Mark (Sissy) Moonert of Riverside, IL; a step-granddaughter, Judy Moonert of Portage, MI; sisters-in-law: Orabelle Porlier of Little Chute, Virginia Yentz of Waukesha, Beverly Cardinal of Pompano Beach, FL, Mary Cardinal, and Sally Cardinal, both of Milwaukee; and many nieces and nephews. In addition to her parents and husband, Bernie was preceded in death by a sister, Fidelis (Vernon) Johnson; and five brothers: Eugene, LaMoine, Paul, Valentine, and Bernard.

The funeral liturgy will be at 10:30 a.m. on Tuesday, September 13, 2011 at ST. JOSEPH CATHOLIC CHURCH, 410 W. Lawrence St., Appleton, with Fr. David J. Funk OFM. CAP. officiating. Friends will be received at the church on Tuesday from 9:30 a.m. until the time of the mass. Entombment will be in Appleton Highland Memorial Park.

The family wishes to extend their sincerest thank you to the staff at Wisteria Haus, Two Rivers, and to the Manitowoc Health and Rehab Center, Changing Seasons, for their compassion and Excellent care of Bernie and her family.

In lieu of flowers, it is Bernie's wish that you do, “Something nice for yourself.”