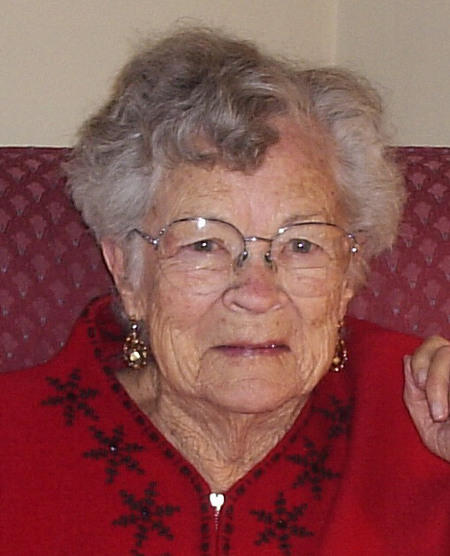 Beatrice A. Captaine, 94, of Appleton passed away on February 16, 2010 at St. Paul Home in Kaukauna. She was born in Maple Grove on April 10, 1915, the daughter of John and Margaret (Madge) O'Connor. After graduating from Appleton High School, she attended Oshkosh State Teachers College and the Badger Academy of Beauty Culture in Milwaukee. She worked as a beautician for many years. On May 10, 1941 she married Jerome Captaine. After fifty plus years of marriage, he preceded her in death on January 22, 1993. Beatrice was an active volunteer in her community. She was a former member of the Board of Directors of St. Elizabeth Hospital and a past president and active member of the St. Elizabeth's Auxiliary.
She is survived by a daughter Margaret “Peg” Captaine, Appleton, a sister, Margaret 'Peg” Hamer, Sheboygan, a sister-in-law Rita Riley, Appleton, brother-in-law Charles (Mayvis) Captain, Appleton and a daughter-in-law, Vicky Captaine, Oshkosh. She is further survived by three grandchildren; Jessica (Spencer) Armstrong, Appleton, Matthew Captaine, Oshkosh, and Megan Captaine, Chicago, IL, and 2 great-grandchildren; Hunter and Elizabeth Armstrong, Appleton, cousins and many special nieces and nephews.
Bea was preceded in death by her parents, husband, son, J.James Captaine Jr., daughter Mary Bradish O'Connor, brother, Dr. Joseph O'Connor, sisters; Mary Resch, Dorothy Ebben and Claire Schuller.
A memorial Mass will be held on Saturday, February 20, 2010 at 11:30 at ST. PIUS X CATHOLIC CHURCH (500 W. Marquette St.) with Father Andrew Kysely officiating. A time of visitation will be held on Saturday, from 10:00 AM until the time of the Mass at the Church.
The family would like to thank the wonderful staff of St. Paul Home, Kaukauna, for their loving care of Beatrice during the past year. Also, special thanks to ThedaCare Hospice, especially Jeannie, Amy, Claudia, Amber, Leta and Pat for their care and support
Wichmann Funeral Home
537 N. Superior St.
Appleton WI 54911
920-739-1231