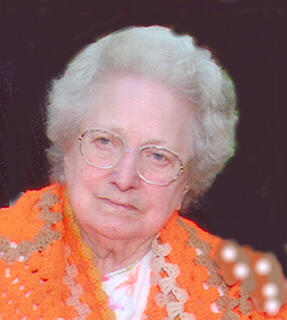 Daughter of John and Theresa Vogl, passed away on Wednesday, April 9, 2008 at the Manor Care Nursing Home located in Fond du Lac, Wisconsin.

She was born in Appleton, WI where she resided for most of her life. Barbara was lovingly referred to as BS (Blessed Saint). She was married to LeRoy Stierman on May 4th, 1946.

Most of her life was spent working as a bookkeeper until she retired. She was a lifelong member of St. Joseph Parish where she enjoyed her volunteer work as a secretary, mass preparations, and the food pantry. She also enjoyed working with flowers and donated her time helping out at Memorial Florist. She loved crafts: making, buying, and giving them. Her favorite place to shop was St. Vincent de Paul thrift store. She was a very special lady. She was always thinking of others and was there whenever needed by anyone. She took communion to the home-bound.

She was preceded in death by her parents John and Theresa Vogl, her husband LeRoy Stierman, and son Paul Stierman.

The funeral liturgy will be held at 3:00 P.M. Monday, April 14, 2008 at St. Joseph Catholic Church (410 West Lawrence Street) with Father Larry Abler officiating. Friends may call directly at church from 1:00 P.M. until the hour of the liturgy. Interment will be in St. Joseph Cemetery, Appleton.

Barbara's family would like to give heartfelt thanks to the nursing staff at Manor Care, Rolling Meadows, and Heartland Hospice for the kind, loving care they provided.