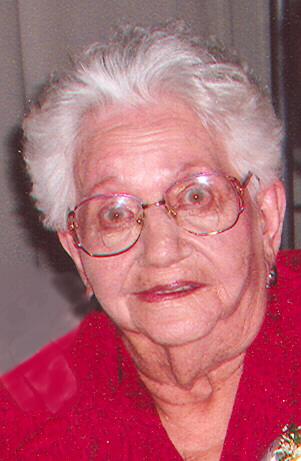 Barbara was born August 19, 1916, in Kaukauna, the daughter of the late Joseph and Theresa (Bachberger) Hartmanstorfer. She married Edward Smith on January 19, 1942, in Appleton. He preceded her in death on October 15, 1989.
Barbara spent many years as a homemaker and raising her four children. She enjoyed her employment with many families in the valley which developed into lifetime friendships. She was a faithful parishioner of St. Thomas More Catholic Church, was active with their Ladies Group, and helping with church dinners, card parties, and bingo. Barbara was a member of the senior citizens group at the Thompson Center. She was very active in charity work, visiting people in nursing care centers, and volunteering at the church office to help with the Sunday bulletins. She took great pride in her family and spending time with them and friends. Barbara‚Äôs joys were fishing, camping hunting, boating, and gardening.

The funeral mass for Barbara will be celebrated at 11:00 a.m. Monday, July 3, 2006, at ST. THOMAS MORE CATHOLIC CHURCH, 1810 North McDonald Street, with Fr. Gerald Falk as celebrant. Interment will be in Appleton Highland Memorial Park. Friends may call from 4:00 p.m. until 8:00 p.m. Sunday at the funeral home, and again from 10:00 a.m. Monday until the time of the liturgy at the church. There will be a parish vigil service at 7:30 p.m. Sunday at the funeral home.

The family would like to express their thanks to the Heartland Hospice, the staff at ManorCare, and Father Gerald Falk for their vigilance and gentle care given to Barbara.