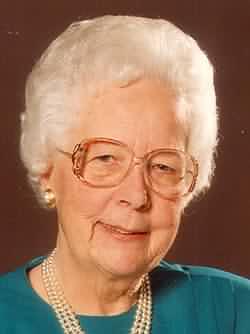 Barbara Ann DeCoster, age 89, of Appleton, died at Cherry Meadows on May 4, 2007. She was born on March 26, 1918, in Little Chute, the daughter of Henry and Nettie (Reynders) Dercks. Barbara married Raymond J. DeCoster on August 23, 1947, in Little Chute; he preceded her in death on September 15, 2005. She was a loving wife, mother and grandmother. Barbara enjoyed cooking and baking for her family and friends. She was also well-known for her willingness to help others. Barbara was employed at Automotive Supply until she began her family and became a full-time mother. Survivors include her children, Karen (James) Wilkinson, Appleton; Kay (Greg) Heindel, Waupaca; and Jean (Brian) McMahon, Appleton; her grandchildren, Jon McMahon and Aaron Wilkinson; her sisters, Gerry Truyman, Appleton, Mary Jane (Bob) Hartjes, Middleton; and her brothers, Nick Dercks, Appleton and Joe Dercks, Menominee, Wisconsin. She was preceded in death by her infant sister, Bernice, her sister Bernice Kray and her brothers Thomas, Robert and James Dercks. The Funeral Liturgy will be at 11:30 a.m. on Wednesday, May 9, 2007, at ST. BERNADETTE CATHOLIC CHURCH, 2331 E. Lourdes Drive, Appleton, with Fr. Don Zuleger officiating. Friends may call directly at the church on Wednesday from 9:30 a.m. until the time of services. Entombment will be at Highland Memorial Park, Appleton. The family would like to extend a sincere thank you to the staff at Heritage Woods and Cherry Meadows for their loving care. In lieu of flowers, a memorial has been established in Barbara‚Äôs name.
WICHMANN FUNERAL HOME
537 North Superior Street
Appleton 920-730-1231
www.wichmannfuneralhomes.com