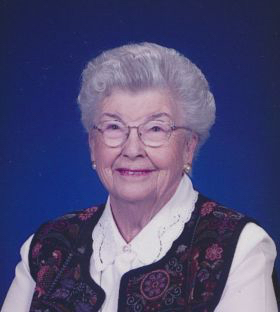 B. Elaine (Thorson) Henry, age 93 died Tuesday, January 5, 2016 after a brief illness at Brewster Village, Appleton, WI. She was born in the Town of Greenville October 26, 1922, daughter of the late Gilbert and Emma (Gilbertson) Thorson and grew up on a farm on Norwegian Island. She married William Clark Henry on June 6, 1942. He preceded her in death on February 9, 1988. Also preceding her in death were sons Jay J. Henry on March 5, 1990, Clark G. Henry on October 8, 2015, and granddaughter Stacey L. Messerschmidt on November 19, 1975. She is further preceded in death by her seven brothers Earl, Arthur, Ervin, Elmer, Vernon (and two in infancy), and two sisters Gladys Pingel and Nellie Lloyd.

Elaine was an employee of Kimberly Clark Corporation for 26 years starting in the steno pool, and retiring as an Executive Secretary. She was very involved as a member of Prince of Peace Lutheran Church, Appleton, volunteering countless hours and was a member of the Ruth Circle and quilting group. Prior to that she was a long time member of Grace Lutheran Church, Winchester, WI where she was baptized, confirmed, sang in the choir, and served on the church council. Elaine has been a blessing to many people in her life, and in return has been blessed by her large church family.

In addition to her church activities, she was very proud of her involvement with the PFLAG organization, and enjoyed the many people whose lives were enriched by knowing her. Elaine was gifted at telling jokes, flashing a twinkle in her eyes and rosy cheeks as she came to the punch line. She also enjoyed Sammy's Pizza and the wonderful friends that Tom and staff have been to the family for many years.

Funeral services will be held at 11:00 AM on Saturday, January 9, 2016 at PRINCE OF PEACE LUTHERAN CHURCH 2330 E. Calumet St. Appleton, WI with Pastor Roger McQuistion officiating. Visitation will be at Wichmann Funeral Home at 537 N. Superior St., Appleton, on Friday, January 8 from 4:00 to 7:00 pm, and at the church beginning at 9:00 am until the time of service. Interment will be at Grace Lutheran Church in Winchester. In lieu of flowers, a memorial is being established for Prince of Peace of Lutheran Church.

The family would like to express a heartfelt thank you to the staff at Brewster Village for the loving care given during her two years as a resident, and support of the family as we spent those last precious days