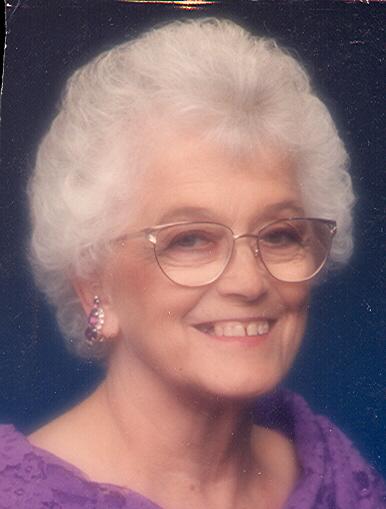 Age 76, died peacefully on Sunday, March 7, 2004 at Franciscan Care Center with her family at her side following a nine-year struggle with Alzheimers Disease. She was born on March 31, 1927 in Appleton the daughter of the late John and Linnie (Holcomb) Young. On August 16, 1947 she married Robert Eichinger at St. Therese Catholic Church in Appleton. They owned and operated Heinie‚Äôs Tavern on Walter Avenue in Appleton from 1957 to 1977. She was also employed for a short time at One Hour Martinizing in Appleton. Audrey and Bob moved to Combined Locks and lived there until 1995, and came to Appleton where they lived since. Audrey enjoyed sewing, knitting crocheting, cooking, reading, the Green Bay Packers, playing Bingo and cards, but the greatest joy in her life was her husband, children, grandchildren, great grandchildren, and dear friends.
She is survived by her children: Linda Eichinger of Greenville, Jean (John) Chapman of Clintonville, Paul (Brenda) Eichinger of Wisconsin Rapids, Diane (Ralph) Kaufman of Appleton, Gayle Bodah of Appleton, Donna (Craig) Wunderlich of Hortonville, Mark Eichinger and his special friend Sue Greeno of Wisconsin Rapids, Robert Eichinger, Jr. of Appleton, Tom Eichinger and special friend Christy Fritch of Greenville, Kay (Dan) Hietpas of Combined Locks, and Gary Eichinger and his special friend Beth of Kaukauna; her grandchildren: Jodie (Marty) VanLyssel, Nicole (Andy) Martin, Eric (Kris) Krablean, Aaron (Mindy) Krablean, Ryan Schmidt, Tracy (Matt) Mancl, Scott Eichinger, Angie and Adam Iverson, Alex Wunderlich; Elliot, Lukas, and Andy Eichinger; David and Autumn Eichinger; Tommy, Emilie, Ashlie and Anna Hietpas; Jaccob, Taylor, and Joey Eichinger; and a grandson Charles due in May. Her great grandchildren include Kaylee, and Kyle VanLyssel; Jacy Eggert, Jordan, Josey, and Jada Martin; Drew and Clay Krablean; Jacob and Taylor Mancl; and Morgan Iverson; her sister Blanch Mueller of Little Chute, and her sister-in-law Marie Young of Appleton; and many nieces, nephews, and cousins.
She was preceded in death by her parents, her husband Robert, her son Bruce, two grandsons: Nicholas Eichinger, and David R. Eichinger; her brother Howard Young, and a brother-in-law Walter Mueller
The Mass of Christian Burial will be conducted on Thursday, March 11, 2004 at St. Paul‚Äôs Catholic Church in Combined Locks with the Rev. Robert Vandenberg officiating. Interment will take place at St Joseph Cemetery. Friends may call at the Wichmann Funeral Home on Superior Street in Appleton on Wednesday from 4-8 PM and at the church on Thursday from 11:00 AM until the time of the mass. Parish prayer and Scripture Services will be at 7:00 PM on Wednesday. A memorial fund is being established.
The family wishes to express their heartfelt appreciation to the Staff of Franciscan Care Center, Heartland Hospice Caregivers, and the Northeast Wisconsin Alzheimers Association for all of their loving care.
Once upon a memory,
Someone wiped away a tear.
Held me close and loved me;
Thank-you, Mother dear.

Mom, you are now free to fly over the rainbow, and you will soar!!