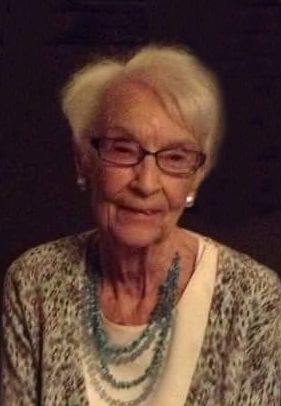 Audrey M. Noie, age 95, of Appleton, passed away with family at her side on Tuesday, October 10, 2017. She was born on July 24, 1922 in Kaukauna, Wisconsin to the late Frank and Ella (Smith) Mitchler, one of four children.
On December 22, 1942 Audrey married George B. Noie in Blackstone, Virginia before his deployment in the U.S Army during World War II. Together they were blessed with four children; Sheri, Cindy, Jeff and George Jr.
In the early years Audrey was an active Brownie and Girl Scout Leader, golfed nearly every week and the family will always treasure those vacations spent at the trailer at Evergreen Campsites at Lake Kussel.
Audrey and George were a perfect match, they were both avid Packer fans and had season tickets; never missing a game. For those away games watched in the comfort of their own home, not a word was to be spoken so that they could watch the game undisturbed. Most recently for her 92nd birthday Audrey’s family had taken her to the Green Bay Packer Hall of Fame Museum. She played “tour guide” and was able recall any and all names, games, or items on display.
They enjoyed many wonderful years of retirement together. They embarked on their creative-side and sold many of their wooden crafts at local art fairs. For fourteen years they annually spent their winters in Arizona enjoying the much warmer weather and golfing.
Audrey is survived by her four loving children, Sheri (Cliff) Doering, Cindy (Tom) Steffl, Jeff (Barbara) Noie and George Noie, Jr.; her grandchildren, Brian (Susan) Helf, Aericka Helf, Chris (Tanya) Steffl, Phil (Ali) Noie, Kim (Brock) Noie, Jordan Noie and Jason Noie and her great-grandchildren, Joseph Helf, Alyssa Noie, Carson Adrian, Ashton Steffl and Piper Steffl. Audrey is further survived by her sister, Jeanne Lemberg and her brother, Dale Mitchler.
In addition to her parents, she was preceded in death by her husband, George, on March 11, 2012; her brother, Bill Mitchler and her two dear godchildren, David and Lisa Lemberg. Audrey was recently preceded in death by her childhood friend, Beata Huss. Within the past two years they shared their 75th High School Class Reunion. Beata passed this October 9, 2017.
The Funeral Liturgy will be held on Friday, October 13, 2017 at 10:30 a.m. at ST. JOSPEH CATHOLIC CHURCH, 410 W. Lawrence Street in Appleton, with Fr. Jim Leary, OFM. CAP officiating. Friends may call directly at the church on Friday from 9:00 a.m. until the time of the services. Interment will be held at St. Joseph Cemetery in Appleton. A memorial fund has been established in Audrey’s name. Online condolences can be shared at: www.wichmannfargo.com.
Audrey’s family would like to extend their many thanks to Dr. David Shinkunas, the staff of Renaissance Assisted Living and AseraCare Hospice for the compassionate care shown to Audrey and her family.
Mom, you have been such an inspiration to all of us; teaching us to live a full life! We will always remember your sense of humor and we know you are looking forward to being with your true love again.