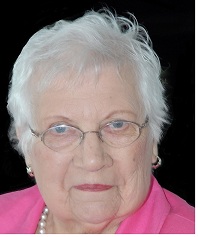 Audrey McGee, age 88, passed away peacefully at Heartwood Homes Senior Living in Menasha. Her family was at her side. Audrey was born in the Marathon County town of Rib Falls on September 2, 1922, the daughter of the late Lawrence and Elizabeth (Krueger) Eggebrecht. On February 3, 1940, she married Leo L. McGee in Lily, Wisconsin. He preceded her in death in November of 1969. In the early 1950's the family had moved from White Lake, Wisconsin to Menasha, and had been residents here since that time. During those years, Audrey had worked in sales at J.C. Penney in Neenah's Fox Point Mall, as a cook at several area restaurants, and also did some marketing for A.A.A. in Appleton. She was an avid Brewer fan right to the end, and enjoyed all of God's creation – flowers, birds, and gardening.

The Christian Funeral for Audrey will be held at 12:00 Noon on Saturday, June 4, 2011 at TRINITY LUTHERAN CHURCH, 300 Broad Street in Menasha, with Rev. Steven S. Billings officiating. Interment will follow in Neenah's Oak Hill Cemetery. Friends may call directly at the church on Saturday morning from 11:00 AM until the hour of the service.

The family would like to thank all of the caregivers who kept Audrey so comfortable during her final days. They include the staff at Asera Care Hospice and all of the angels at Heartwood Homes in Menasha. We will never forget your kindness.