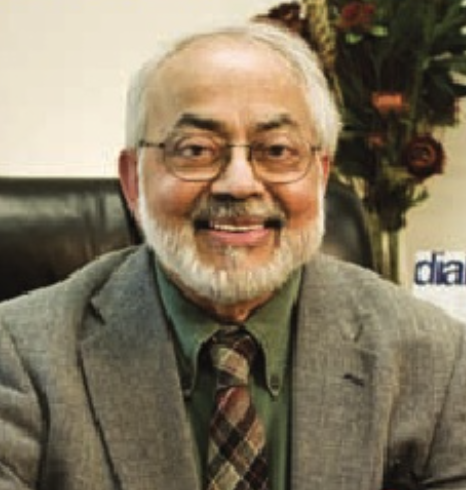 Arun K. Chatterji, Ph.D. passed away on Tuesday, January 3, 2017. He graduated from Kolkata University in 1961, earning a M.Sc. degree in Chemical Engineering. He was accepted at 20 years old into Iowa State University in 1963, earning a Ph.D. in Chemical Engineering. He did postdoctoral work at the USDA Northern Regional Laboratory and then began his professional and business career with Arthur D. Little, consulting on the early stages of the development of the xerography process. In the late 1960's he worked for Xerox as a research and development scientist. In 1971, he taught at Shaw University, a historic black college, in Raleigh, North Carolina, where he was awarded a prestigious NASA research grant. As a professor and mentor, he advanced the opportunities for his minority students to engage with high-level scientific research with great dedication.

In 1977, Dr. Chatterji and his family moved to the Fox Cities, Wisconsin as a senior research scientist at Kimberly Clark. He then worked as a consultant for Ft. Howard and Great Northern Paper and eventually established his own consulting firm, Technology Transfer Concepts International, which focused on developing new technology applications from natural plant sources.
Dr. Chatterji's entrepreneurial spirit led him to start several companies which he led and managed as Chairman and CEO, including Ayurvedic-Life International and Santal Solutions with his business partner, Dennis Torkko. Those companies focused on developing and commercializing plant based extracts for applications in polymer synthesis, bioelectrodes, and AIDS virus control, as well as developing novel applications for diabetes, weight control, stress, arthritis, and benign prostatic hyperplasia.

Dr. Chatterji authored many scientific articles and held dozens of U.S. and foreign patents. He was the very first Wisconsin-based recipient of the Small Business Innovation (SBIR) Award in 1981.

Arun Chatterji was born in Burdwan, India, to a family of historians, lawyers and judges. He was the son of Gopal Chandra Chatterji, professor of law and Bengal state judge, and Sneha Chatterji. His happy childhood was surrounded by grandparents, cousins and many friends. Married in 1970 to Manjari Chatterji, a lecturer at the University of Wisconsin-Oshkosh in English, he is the beloved father of two daughters, Malini Chatterji, born 1974, and Malika Chatterji, born 1982. He inspired his children to pursue their dreams in music and law and shared with his family four decades of summer holidays at their favorite cottage in Door County on Lake Michigan. He lived in his beautiful home in Neenah with his family from 1977 to 2017. His loving wife, daughters and his most faithful dog Poncho will miss his larger than life presence, humor, love and affectionate nature the most.

In addition to his immediate family, he is survived by his beloved son-in-law, Dr. Gaurango Banerjee, a professor of economics in Missouri (married to Malini Chatterji) and his two precious grandchildren, Avik and Akhil Banerjee, his loving sister, Jayati Banerjee, her husband and her younger son, Sundarlal Banerjee and his family, who live in London and her older son Ruplal Banerjee and his family who live in Copenhagen, Denmark.

He is remembered by family, colleagues and friends alike for his invincible presence, his curious and brilliant mind, his mischievous sense of humor and play, his ability to tell a story, his love for classical Western and Indian music, his warm and affectionate nature and his bear hugs, and an abiding spiritual belief in the goodness of the world.

Traditional Hindu rites have been observed privately for Arun.

His family thanks all of his friends and colleagues for their invaluable support and love.