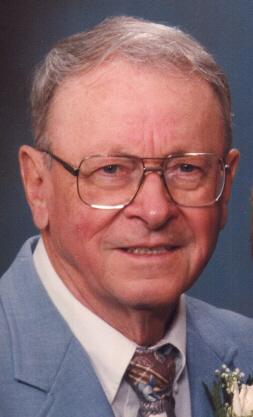 Age 85, passed away at home, surrounded by his family, on Friday, January 14, 2011. He was born in Kimberly on July 27, 1925 to Leo and Marie (Van Laarhoven) Santkuyl. On June 18, 1949, he married his wife of 61 years, Joan Young. Art served as a Sergeant with the U.S. Air Force in WWII. He was responsible for the war room in Germany, along with Bob Malmstrom. They received a letter of commendation for developing a room size map to manage troop locations throughout the European war zone. When he returned, he graduated from Fox Valley Technical College, School of Business. He worked in Madison for the Dept of Statistics, then joined Kimberly Bank where he worked for 15 years before founding Art Santkuyl Insurance and Real Estate Agency. He was an active member of Holy Name of Jesus Church, Kimberly Businessmen?s Association, Knights of Columbus and the Kimberly American Legion Post #60. Art will be remembered for tirelessly and enthusiastically volunteering his services managing the finances, organizing, planning and implementing the church, Knights of Columbus, and Legion picnics for three consecutive years. He was also involved in organizing the Kimberly bi-centennial celebration and parade in 1960. He enjoyed bowling, and sponsored a team for the Businessmen?s Bowling League at Jerry?s Lanes in Kimberly during which he bowled a perfect 300 game in the same year his team won the championship. He enjoyed hunting, fishing, traveling and spending summers at Bear Lake cottage with his family and friends where all were welcome. At the age of 70, Art started a polka band known as ?Grandpa and the Kids with their Happy Notes.? He enjoyed people and was known as the life of the party.

Funeral Services are Tuesday, January 18, 2011 at HOLY SPIRIT PARISH, Kimberly Campus, 600 E. Kimberly Ave., Kimberly. Family and friends will be received at the church beginning at 2:30 pm, with a celebration of Mass at 5:00 p.m. Dinner will be served following Mass.

The family extends a special thank you to Dr. Orlando Taleon, the staff at ThedaCare at Home Hospice and Cherry Meadows Hospice, and volunteer Jim Hemmen, for their wonderful care of Art and his family. We also extend our thanks to all of the people in the Heart of the Valley for their support and friendship extended to Art throughout his career.

In lieu of flowers, the family would appreciate donations be made, in memoriam, to the Little Chute Windmill Project. Donations can be made by calling 920-788-2629, online at www.littlechutewindmill.org or at the service.