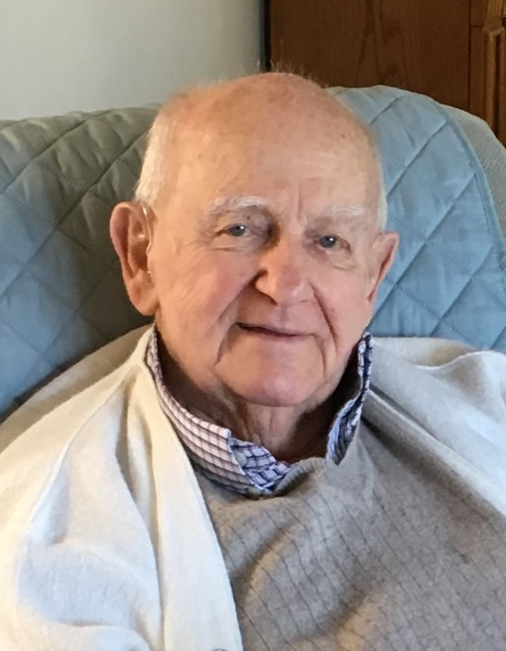 Arthur John Theiss, age 96, joined his family for their heavenly reunion on September 23, 2019. Art was the youngest of 10 children, born on March 12, 1923, to the late Andrew and Mary (Huhn) Theiss. In 1941, on graduation day from Appleton High School, Art’s love of adventure took him to the Great Lakes where he worked on the ore carrier, Joseph S. Morrow. A year later he would be drafted into the U.S. Army during WWII where he served from 1943 to 1946 as ShipMaster of the tug he privately named Lois Mary, of 335th Harborcraft Division in Southhampton and Cherbourg. Returning from Europe, he married Lois Feuerstein on September 7, 1946. They shared many happy memories with their daughter, Amy, before Lois’ passing in 1983. Art worked as a shop foreman at Allis Chalmers for 44 years, retiring on his birthday in 1985. After retirement, Art was blessed to find love again when he married Dorothy Smith in 1988. Art and Dorothy’s families bonded quickly. Sadly, Dorothy passed in 2012.

Art had many titles: husband, father, grandfather, however most knew him as the “fun Uncle”. He enjoyed toys and puzzles, as well as playing cards, cribbage, watching the Packers or Brewers, and golfing with his special group of friends. Art liked to stay current and was constantly learning. He loved to read books – preferably westerns, tinker with wood working and was a self-taught handy man. Even in his later years he continued to golf, bowl, travel, and have the occasional brandy old-fashion.

Art’s Catholic faith was incredibly important to him and his family. He was a founding member of St. Bernadette Catholic Church and stayed active until moving to the Milwaukee area to be closer to his daughter. Art will always be remembered for his stunningly blue eyes and his warm smile. He drew people in with his cheerful and positive spirit, and would go to any length to make the people he loved smile.

The Funeral Liturgy for Art will be held at 11:00 am on Thursday, October 3, 2019, at ST. BERNADETTE CATHOLIC CHURCH, 2331 East Lourdes Drive, Appleton, with Father John Katamba officiating. A time of visitation will be on Wednesday, October 2, 2019, at the WICHMANN FUNERAL HOME, 537 N Superior St, from 4:00 pm until 7:00 pm and again at CHURCH on Thursday from 9:00 am until the time of Mass. Burial will take place at St. Joseph Cemetery in Appleton. Online condolences may be expressed at www.wichmannfargo.com.