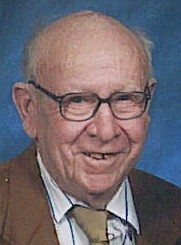 Arnold C. Seidler “Arnie”, 86 died on Saturday June 7th 2008 at Appleton Medical Center. Arnold was born on Feb 18th 1922 in Cecil, Wisconsin to the late Ferdinand and Elsie (Priem) Seidler. Arnold graduated from Cecil State Graded School in 1938 and Shawano High School in 1940. He was a charter member of the Wisconsin Future Farmer's of America. On July 14th 1945, he was united in marriage to Irmgard Noffke at St. John's Parsonage. Arnold and Irmgard were blessed with four children. He was a long time member of St. John United Church of Christ and served as its general contractor during construction. Arnold started the company A.C. Seidler and Son Construction and had a reputation for building high-quality custom designed homes in the Fox Valley. He was a member of the Fox Valley Builders Association and a licensed realtor. Arnold loved his cottage on Shawano Lake and spent as much time as possible at the lake. He is survived by his beloved wife Irmgard Seidler, son Mike (Barb) Seidler, daughters Carla (Bill) Frevert and Sharon “Babe” (Chuck) Roberts, and grandchildren Sarah and Jenny Seidler, Jaymes (Sarah Coppens-Fiancé), Christopher and Steven Seidler, Katie (Ryan Connors-Fiancé) and Annie Frevert, and Krystina and Bryan Roberts. He is also survived by sisters Adelia Westphal, and Ruth Mahn, a brother George (Norma) Seidler and many nieces and nephews. He was preceded in death by his son Cecil Seidler, parents, four brothers Robert, Edgar (Hope), Richard (Adella) and Melvin (Elaine), two sisters Clara (Edwin) Buelow and Kate (Harry) Seivert. Funeral services for Arnold will be held at 6:30 p.m. on Tuesday, June 10, 2008 at ST. JOHN UNITED CHURCH OF CHRIST, 1130 W. Marquette St., Appleton, with Rev. Dr. Tom Fritz officiating. Visitation will be held at the church from 4 p.m. until the time of services. Burial will be in Highland Memorial Park, Appleton. A memorial is being established.
Many thanks to the staff at the Appleton Medical Center Outpatient Treatment Center,
and Dr. Phillips and staff at Fox Valley Hematology/Oncology for taking such good care of Dad/Grandpa.