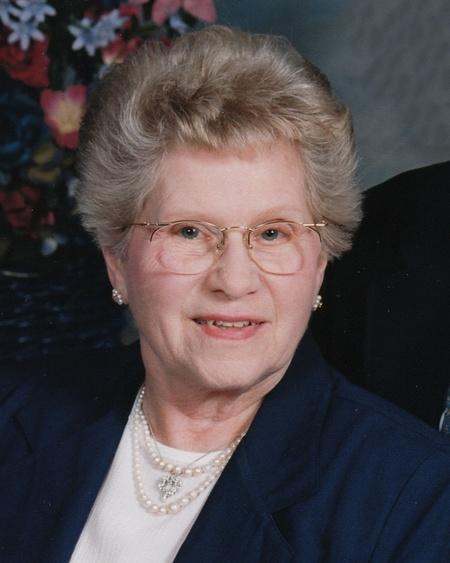 Arleen Baseman, of Appleton, Wisconsin, formerly of Omaha, Nebraska, passed away on Sunday, June 16, 2013 with her family at her side. She was born on April 4, 1922 in Hitchcock, South Dakota, the daughter of the late Henry and Molly (Barness) Harms. On January 16, 1944, Arleen married Elwood Baseman in Redfield, South Dakota. In 2007, they moved to Appleton prior to Elwood's passing in 2008. She was a member of Prince of Peace Lutheran Church in Appleton. Arleen volunteered with the Special Friends Program at Stephen Foster Elementary Charter School in Appleton.
Arleen is survived by her children: Elaine D. (Bruce) Ackerson, Janet A. (David) Butler, and Edward H. (Judith) Baseman; son-in-law: Michael Bruening; four grandchildren: Christopher J. (Charis) Ackerson and John T. (Heather) Ackerson; William D. Butler; Erik M. Baseman; great grandchildren: Aidan and Zoe Ackerson; sister: Lucille (Ignatius) Gruenwald and sisters-in-law: Esther “Tootie” Gould, Eleanor (Duane) Wanner, and Phyllis Harms. She is further survived by nieces, nephews, other relatives, and friends. Arleen was preceded in death by her husband, Elwood Baseman; daughter, Lois Baseman; and grandson, Tyler Baseman, along with many sisters and brothers.
The funeral service and committal for Arleen will take place in Omaha, Nebraska. A memorial service in Appleton will be held at a future date. Memorials to Prince of Peace Lutheran Church in Appleton are appreciated. Online condolences can be offered at www.wichmannfargo.com.