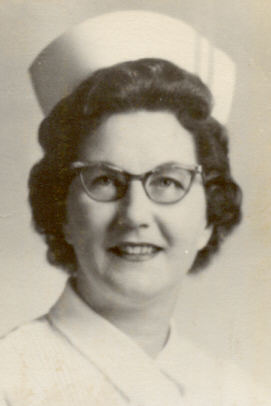 Age 90 passed away on January 31, 2005 in Harlingen, Texas. Arabel was born on July 31, 1914 to Francis Mose and Louise (Aerts) Goffard on the Goffard Homestead in East DePere. She graduated from East DePere High School and on Memorial Day, May 30, 1933 she married William J. ‚ÄúBill‚Äù Smith. Arabel worked for years at The Spot Supper Club and when she was 45 years old and her daughters were raised, she went back to school and got her LPN degree. She worked at St. Vincent Hospital for years and then did private duty nursing.

She was preceded in death by her husband, Bill, in 1987, her parents, a sister: Blanche Pratsch, a brother: Marvin ‚ÄúBud‚Äù Goffard and by Bill‚Äôs parents: Arnold and Anna Smith, Bill‚Äôs brothers: Mike, Joe, Clarence, Harvey and Buddy and his sisters: Viola and Anna Mae.

The funeral mass will be held at 3:00 p.m. Thursday, February 10 at Holy Cross Catholic Church, 309 Desnoyer Street, Kaukauna with Fr. Jack Mullarkey officiating. Friends may call at the church from 12:00 noon until the time of the mass. Burial will be in Fort Howard Cemetery.

‚ÄúTootie didn‚Äôt leave behind a cup that was half full or even half-empty.
The cup was drained dry because she lived every minute of her life.‚Äù
Fargo Funeral Home
400 W. Wisconsin Avenue
Kaukauna 920-766-6200
www.fargofuneralhomes.com